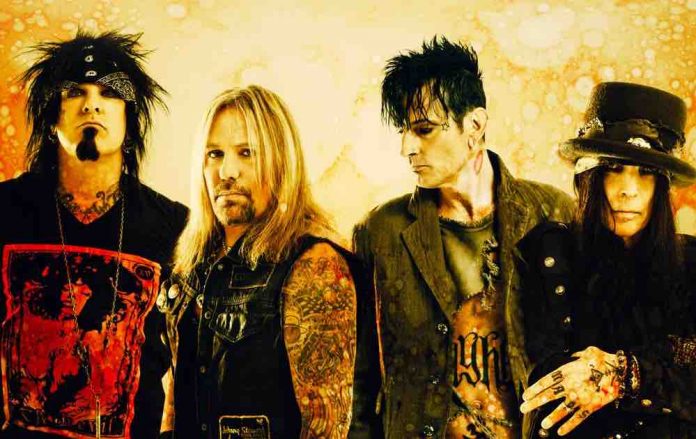 Motley Crue bassist Nikki Sixx revealed that somebody involved in the Rock and Roll Hall of Fame told Motley Crue they will ‘never’ get in the Rock Hall in a new Kerrang interview.

Will these fans ever get to see Mötley Crüe play live again?

“I was actually doing an interview with Tommy [Lee, drummer] a couple of weeks ago, and we were asked if we would ever play together again. And Tommy said, ‘I don’t know. Maybe if we got into the Rock And Roll Hall Of Fame or something, we could dust off a couple of our old classics.’ I was, like, ‘Really?’ And he said, ‘Why not?’ But we don’t have any plans because we were told by the Hall Of Fame that we would never get in, because of how we’ve acted, so that’s kind of it.”

Would you ever consider touring as a band again?

“Well, I don’t know. We haven’t had that conversation. I mean, we wrapped up for a reason. I don’t know – I keep saying a hard no to that, but if something came up, like we were invited to play the Super Bowl half-time show, maybe that’d be something we’d be interested in doing. But touring has never been a conversation, and we do talk about stuff all the time.”

The long-awaited Mötley Crüe biopic, The Dirt based on the 2001 New York Times bestselling autobiography debuted last Friday, March 22. The band immediately became the top searched topic on Google Trends with a 4300% spike in searches.

Streaming partners have been quick to support the film’s soundtrack and Mötley Crüe’s catalogue with the Global Marquee feature on Spotify, and Apple Music building a dedicated Mötley Super Room. The pay back was instant with a 570% stream increase on Spotify, a 900% stream increase on Apple Music, and Apple iTunes downloads growing 2027%. Amazon, with triple digit streaming growth is benefitting from sales of the book being back at #1 music book, and Mötley’s Deezer streams are up 669%.

The Mötley Essentials playlist is now charting higher than Drake Essentials on Apple Music. The effect is being felt globally in 150 markets with top 10 iTunes charts around the world.

Early returns show the movie at 85% audience score at Rotten Tomatoes, on par with Bohemian Rhapsody’s 87% and ahead of Black Panther’s 79%. It is changing perceptions too, as women are enjoying “The Dirt” just as much, if not more than men, giving it a higher grade (7.4/10) than their male counterparts (7.1/10), according to an IMDB survey.

The cautionary tale aims to deglamorize the sex, drugs and rock n roll lifestyle led by the notorious rockers. It unflinchingly portrays domestic violence, drunk driving and drug addiction to a mass audience. The Guardian’s Stephen Snart writes “Real-life manager and producer Allen Kovac has said in interviews that the mission of the movie is to deglamorize the rock’n’roll lifestyle. That does come through.”

Queen’s Roger Taylor, who appears in the book, was similarly awed at a preview screening, exclaiming: “Wow, that took me back! Brilliant.”

The film’s stars, Douglas Booth (Nikki Sixx), Game of Thrones’ Iwan Rheon (Mick Mars), Colson Baker (aka Machine Gun Kelly) (Tommy Lee), Daniel Webber (Vince Neil), David Costabile (Doc McGhee) and Pete Davidson (Tom Zutaut) have all been getting critical kudos. “They possess similar abilities to navigate between charm and repulsion, all working together to create such a chummy group that their power as an ensemble elevates the material. Just like their real-life counterparts,” wrote The Guardian.

Mötley Crüe’s Nikki Sixx says, “In the film we show painful examples of domestic violence, DUI, manslaughter, drug overdose and the loss of a child. We couldn’t possibly have crammed everything from a 430-page book into an hour and 50-minute movie, but we felt we achieved our objective of showing the downside of sex drugs and rock and roll.”

Nikki Sixx hopes to use the message of the film to draw attention to the USA’s opioid crisis. Sixx, a recovering addict himself, has established a music program for kids at Covenant House in Los Angeles and is instrumental in drawing attention to the root causes of addiction. A personal mission, Sixx is collaborating with the U.S. Surgeon General to fight opioid addiction, and will bring his best-selling Heroin Diaries book to life with a musical of the same name, due to debut in 2019 with partners including Live Nation Ticketmaster, 11-7, Scott Borchetta, and Downtown Music.

Meanwhile, on the music side, The Dirt Soundtrack on Mötley Records and Eleven Seven Music immediately reached #1 on the iTunes All Genres Chart and currently stands at #4 US and #5 worldwide. The Greatest Hits album currently stands at #2 in the US on iTunes and at #11 worldwide. The soundtrack features four new songs including the first single, “The Dirt (Est. 1981) (feat. Machine Gun Kelly)” and their unlikely cover of Madonna’s “Like a Virgin.” In addition, Spotify garnered an 8-fold increase in daily streams, from approximately 400,000 to 3,600,000, and still increasing.

“Our strategy was to use both the film and music algorithmic echo chamber to have a virtuous circle, each propelling the other to greater heights. The new song is ‘The Dirt feat Machine Gun Kelly,’ the film is titled ‘The Dirt,’ The Book is ‘The Dirt.’ And the audiences have voted on the music streaming platforms and on social media, critics are a thing of the past as Bohemian Rhapsody has shown,” said Kovac, who served as a producer on the film.

Kovac gave kudos to Eleven Seven Music senior management and Mötley Crüe Managers at 10th Street Entertainment, “I want to tip my hat to Chris Nilsson and Konstanze Louden, and the rest of the 10th Street Management team, Eleven Seven Label Group COO Steve Kline, GM Rose Slanic, VP Mary Thayer, Europe MD Dan Waite, CFO Dan Lieblein, and their teams who are some of the most innovative and progressive marketers in entertainment today. The success of the music and this film comes from their efforts.”

After almost two decades since the ground-breaking publication of “The Dirt: Confessions of the World’s Most Notorious Rock Band” by HarperCollins in 2001, the film version has come to life, causing just as much controversy as the book did when it was all the talk of bands on the rock festival circuit, where copies were strategically placed. From the film’s overall buzz, the book landed at #1 on several of Amazon’s book charts.