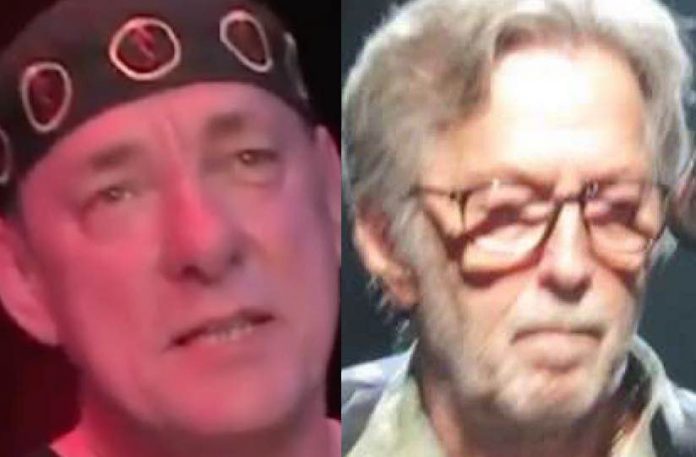 Neil Peart and Rush superfan BJ took to Twitter to reveal this quote about Eric Clapton and the late Neil Peart. The quote showcases Peart giving the legendary Clapton ‘the business’ as the quote states: “Eric Clapton said he wanted to burn his guitar when he heard Jimi Hendrix play. I never understood that because, when I went and saw a great drummer or heard one, all I wanted to do was practice.” Now that is what I call an ‘epic burn’!

In other Eric Clapton news, fans recently took to the LetsTalkMusic subreddit to discuss and debate their overall opinions on the acclaimed guitarist. gazella47X wrote: “Eric Clapton was fantastic in all his bands up until he went solo. I can understand that he got tired of being judged by his shredding skills and by rock in general. The 70s weren’t a good time for the blues and I wouldn’t think the 80s were either except Stevie Ray Vaughan proved otherwise, and Robert Cray had a big album in 1986. I would love to hear him sit down and make a real blues album. BB King always seemed a bit gussied-up to me, but someone like Albert Collins would be a good model. He can get Keith Richards as a guest, and I bet Bob Dylan knows what for as well.”

While bgusc replied: “I really enjoyed some of Clapton’s 70s work, like 461 Ocean Boulevard. Sure it wasn’t groundbreaking but I think he wrote a good series of focused, consistent grooves in that album. His soloing wasn’t the focal point and it wasn’t supposed to be. His 80s output was lacking (like many many other artists from the 60s and 70s), but I think he should be given credit for that great unplugged album in the 90s and a pretty solid re-working of his most famous song.”

Whereas LongDickOfTheLaw69 proclaimed: “Eric Clapton’s a great guitarist, but he’s a pretty weak singer and songwriter. He was always better as a lead guitar player. Clapton does alright as a frontman if he has someone with a strong voice and decent songs helping out, but otherwise, his weaknesses start to show. That’s why he did so well early in his career and so poorly when he went solo.”