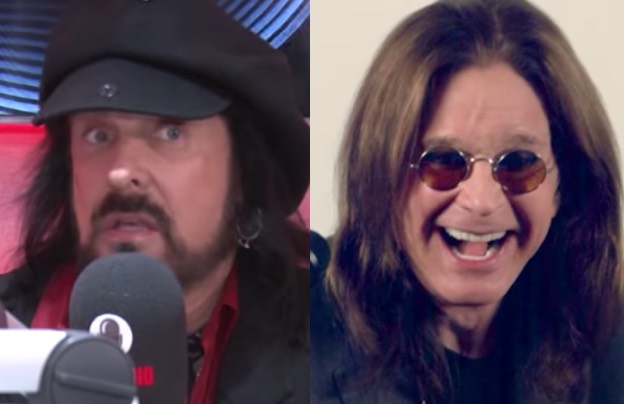 In a new SiriusXM interview, Motley Crue bassist Nikki Sixx claimed that Ozzy Osbourne licked his urine. He discussed the story when asked if Motley Crue had to ask for permission to include the scene in ‘The Dirt’ where Ozzy Osbourne exposes himself to the band at a hotel pool, and then proceeds to snort ants on the ground after the band don’t have any cocaine. Alternative Nation transcribed Nikki Sixx and Tommy Lee’s comments.

Nikki: That would be on Netflix. That’s the kind of stuff that we have to stay out of. We can’t really call up Sharon [Osbourne] and go ‘hey Sharon’, we just left that up to them, so I’m sure everything is working out.

Tommy: ‘Hey Sharon, can we show your husband licking up Nikki [Sixx’s] piss.

Trunk: Well somebody said ‘all right’ because it’s there.

In the new Motley Crue biopic The Dirt on Netflix, there is a scene where an actor playing legendary Black Sabbath singer Ozzy Osbourne is shown coming up to see Motley Crue at a hotel pool while they are on tour. He exposes himself off camera, showing his dick to Motley Crue. Osbourne asked the band for cocaine, and when he doesn’t get it, he snorts ants on the ground. Nikki Sixx recently confirmed that this story is true and really did happen. To see video of the scene, you can watch The Dirt on Netflix, which has received very positive reviews from fans on IMDB and social media.

Ozzy Osbourne tweeted a few days ago, “Today is #WorldWaterDay and I’m honored to join @UN_Water to spread the word to help people around the globe get access to safe drinking water because it is a human right. @CleanWaterHere Join me and let’s share #CleanWaterHere2019 around the world.”

World Water Day is, “Marginalized groups – women, children, refugees, indigenous peoples, disabled people and many others – are often overlooked, and sometimes face discrimination, as they try to access and manage the safe water they need.

This World Water Day, 22nd March, is about tackling the water crisis by addressing the reasons why so many people are being left behind.”