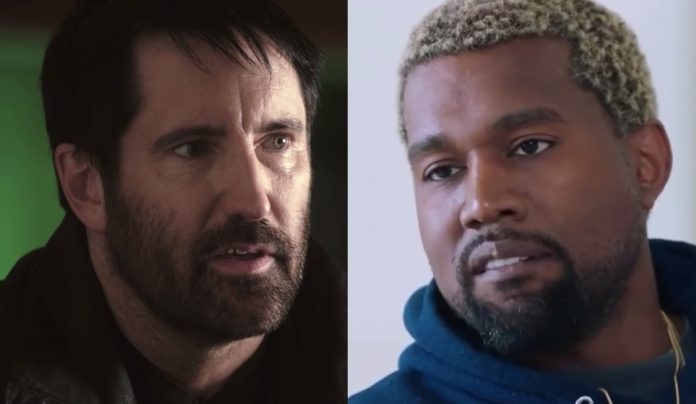 While he admits that his alienation from pop culture might be down to his age, he suggests that he would like as many thinkpieces devoted to rock – presumably including him – as there are about hip-hop. “How many Kanye West thinkpieces have the Guardian done in the last fucking month?” he asks. Er, a few. “The guy’s lost his fucking mind: that’s the thinkpiece. His record sucked, and that’s it. He has made great shit; he’s not in a great place right now.” So you’d like the conversation to be wider? “It would be nice, but there’s no appetite.”

West candidly has opened up about dealing with his bipolar disorder and suicidal thoughts on his new album and in recent interview. He also has been a vocal supporter of President Donald Trump, while Reznor ripped the President in the Guardian interview.

NIN’s new album Bad Witch started “from this position of: I think I know who I am now, the chaos feels behind me, there’s family life and stability. It was me daring myself to say: ‘What if all that was bullshit? And what I really am is an addict in remission that can’t wait to light a match to the whole thing?’”

Aside from this flirtation with the devil, he and Ross describe it as a reflection on Trump’s America. “It feels like things are coming unhinged, socially and culturally,” says Reznor. “The rise of Trumpism, of tribalism; the celebration of stupidity. I’m ashamed, on a world stage, at what we must look like as a culture. It’s seeing life through the eyes of having four small kids – what are they coming into? And who am I in this world where it feels like every day the furniture got moved a bit while I slept?”