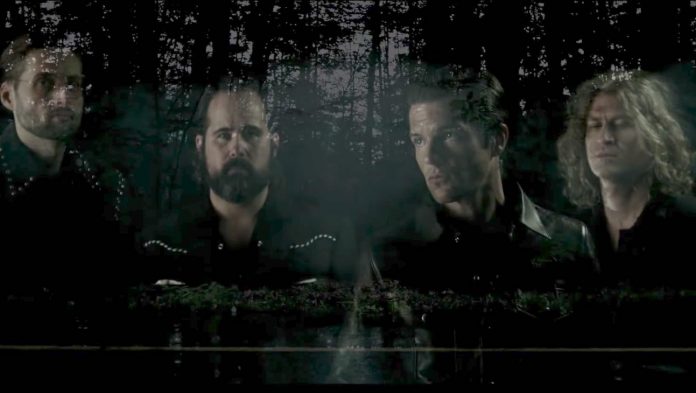 In an NME interview yesterday, Brandon Flowers and Ronnie Vannucci confirmed The Killers are still committed to recording their sixth album after the Wonderful Wonderful tour ends, with no breaks for solo albums.

Flowers and Vanucci seemed to hint that guitarist Dave Keuning and Mark Stoermer, who have temporarily quit the band as live members, could have more permanent exits from The Killers if they refuse to return to the studio when Flowers and Vanucci want to.

NME asked: “So, it won’t be a five year wait for a new album this time?”

Ronnie: “No, I doubt that. We’re already thinking about bringing our recording rigs with us and we’ve been messing around backstage with ideas. It’s in our minds and I think we want to get to it right away. I don’t want to take anymore time and I think we’re ready.””

NME asked: “How do you feel about getting back into a room with Dave and Mark? Are they on board?”

Ronnie: “I think they are, I haven’t had too much of a conversation with them about it. I’m of the thinking in that if they are ready and willing, then let’s do this. In the end, if they’re not then you know, I’ll reluctantly keep on and do it without them. I don’t mean to sound fiery but I’m on a wave right now and I don’t want to get off it.”

Brandon: “We haven’t really gotten into that territory yet, I mean me and Ronnie are getting along, and there’s not really a lot of contact with the other two.”

Mark Stoermer announced his indefinite break from touring with The Killers in 2016, but he was heavily involved with writing and recording Wonderful Wonderful, and was featured in all promotional photoshoots in 2017. Dave Keuning was absent from several tracks on the album, and refused to show up for the album photoshoot. He did play very early shows on the Wonderful Wonderful tour last summer before quitting touring following Lollapalooza 2017. Stoermer and Keuning reunited with Flowers and Vanucci for the Vegas Strong benefit concert in December. Ted Sablay and Jake Blanton have been touring their place on guitar and bass respectively.