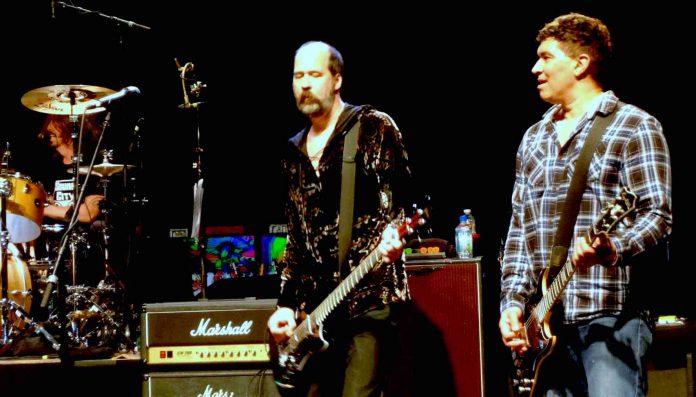 Photo by Brett Buchanan for AlternativeNation.net

Kerrang unveiled their ‘Nirvana Reunited’ cover on Monday shocking fans, and the band are going to address what their Cal Jam performance ‘might mean going forward’ in the interview. Kerrang posted the following preview on their website for the issue that will be released on Wednesday:

“Last week, the world witnessed rock history as the surviving members of Nirvana joined forces for a special six-song celebration of the band’s legacy at Cal Jam. And we were there, onstage and backstage as it happened. Here, Dave Grohl and Krist Novoselic reflect on what it meant, and what it might mean going forward…

Plus, in honour of the Nirvana celebration at Cal Jam, we’ve got a very special piece of gig art for you, designed by legendary artist Frank Kozik. Check out the amazing work he’s done for Soundgarden, blink-182, Queens Of The Stone Age and loads more at Frankkozik.net.

Elsewhere in the mag, Evanescence’s Amy Lee opens up on success, tragedy, and taking her family on tour; All Time Low talk new music and insecurities; Nightwish/Northward singer Floor Jansen takes us inside her very metal musical soundtrack; and we say ‘Bonjour’ to French synthwave revolutionaries Carpenter Brut.

Over in the reviews section, U.S. rock’s most-likely, Greta Van Fleet, deliver the retro-tinged goods on their groovy, soulful debut, while Australian metalcore mob Hellions get weird on their fourth record. On the live front, Slash proves he’s still king of the riff as he and his Conspirators bring a hearty dose of rock’n’roll to New York, The Amity Affliction get heavy in London, and The Black Queen get their groove on in Manchester.

All this and more is available in the new issue of Kerrang! – which you can get anywhere in the world when you order online through Newsstand. But for UK residents, it hits the shops on Wednesday, October 17 from all good newsagents.”