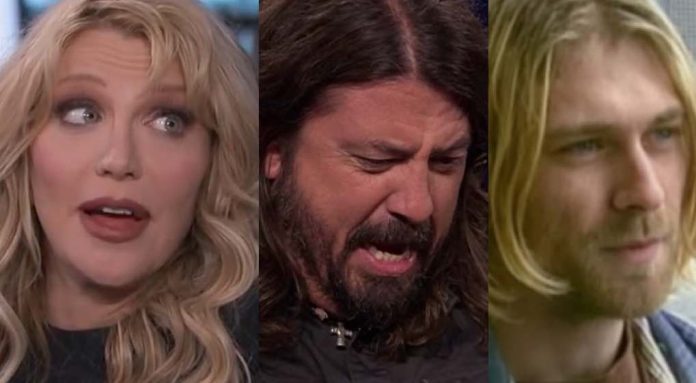 According to court documents obtained by The Blast, “Marc Jacobs is planning on calling all four of them as witnesses in the case. Love and the surviving members of Nirvana had battled for years following Kurt Cobain’s death in 1994. They even had dueling lawsuits over Nirvana money for some time.

The trio ended their 20-year feud when Nirvana was inducted into the Rock and Roll Hall of Fame in 2014.

The docs also reveal Nirvana L.L.C. believes the damages by Jacobs total in excess of $1 million.”

TMZ reported in December that Nirvana believe that their iconic smiley face design was stolen by clothing brand Marc Jacobs, and they have filed a new big money lawsuit. Lawsuit documents claim that in November 2018, Marc Jacobs announced the release of its “Bootleg Redux Grunge” collection featuring socks, shirts and sweaters with the MJ line and a squiggly yellow smiley face. Nirvana has owned the trademark to a very similar smiley face design since 1992, and the band think “Bootleg Redux Grunge” is a blatant ripoff of the design.

The lawsuit also claims Nirvana as one of the founders of the “Grunge” music scene … so even the Marc Jacobs’ line name was created thanks to the band. How much money could Dave Grohl and Krist Novoselic end up with if they win? We’ll have to wait and see.

Marc Jacobs have a connection to Nirvana and Kurt Cobain, as Frances Bean Cobain modeled for them last year.

“I don’t think I’ll be modeling for anybody else for a very long time—this is 100 percent outside my comfort zone,” Frances Bean Cobain said about the campaign in a January 2017 Vogue interview.. “I wouldn’t have done it with anyone other than Marc.”

As the daughter of rock legends Kurt Cobain and Courtney Love, Cobain comes with a style cachet that brands have been eager to harness. Though approached over the years by various labels hoping to enlist her for endorsements, she turned down each offer until longtime supporter Jacobs came calling.

“I don’t model unless I think the project is cool, and I don’t put my name behind something that I don’t genuinely believe in,” says Cobain. “I thought this collection was great, and I was flattered that Marc thought of me for this. What I said to Marc when I was saying yes was that he’s an underdog for the masses. He’s still very rebellious within the fashion world, and he’s been like that his entire career.”