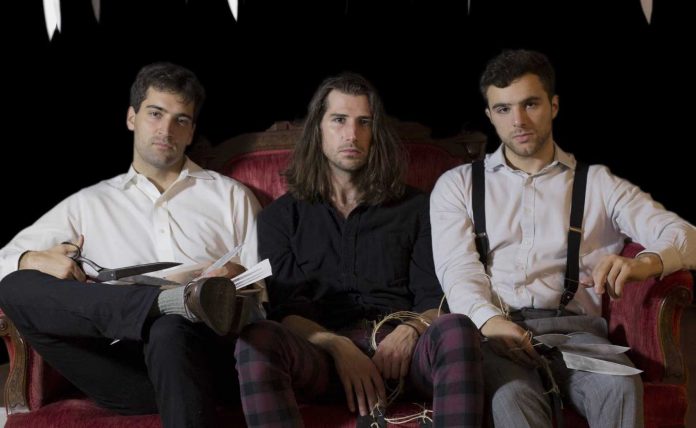 Nowadays many alternative rock bands love to turn back time to the past, reminding fans of the genre’s hey day and showing their love for the greats of yesteryear. Raven King on the other hand, put a nice fresh take on this style. Hailing from Providence, a city known for its art and music, these up and comers mix in acid jazz tones, funk grooves, and tons of emotion. The band’s self-titled album will impress music fans ranging from grunge die hards to fans of prog rock and experimental styles of music.

The band is comprised of guitarist/vocalist AJ Bucci, bassist Gerrit Curti, and drummer Will Boisseau. This trio describes themselves as grunge meets art rock and go for a very melodic yet dark and atmospheric vibe.

This can be seen well in the latest single Drool which from the very start sounds like a fusion of Pink Floyd and Nirvana with its acid jazz guitar town bleeding into riffs that sound like something Kurt Cobain would without most defiantly write, and it has very Nevermindesque vocals. Then we have Carnival which fans of Dumb by Nirvana will love, with very Red Hot Chili Peppers style bass lines also thrown in.

The funkiest song here is Diminished, sounding like laid back funk rock for a majority of it just to build into punk rock aggression at many parts.

The most stand out track goes to Within Reach. This track will make you wonder if you just switched to a different band, as it has similar vibe to No One Knows by Queens of the Stone Age with acoustics thrown in.

Lost Token is the track that old school grungers will sink their teeth into. This harsh rocker of a song sounds just like it could have come off the first few Soundgarden albums.

The production on the album is so crisp you will be shocked to find out it was self-produced by the band themselves. None of the instruments or vocals overpower each other. The entire record is unpredictable, with odd mixes of soft soothing melodies and vocals with harsh distortion and screams thrown in making for a disc where no two songs sound the same.

All and all this album is good proof that music has no rules and that anything can be mixed with anything if done right.