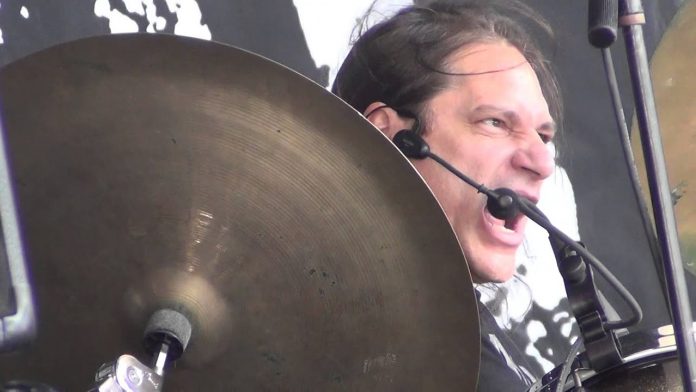 NOCTURNUS AD have released their long-anticipated debut full-length Paradox on May 24th via Profound Lore Records.

NOCTURNUS AD’s Paradox is the direct and proper follow-up to The Key, both musically and thematically where the story and themes vocalist/drummer Browning initially laid out continue through the lens of the occult. Paradox’s story follows the journey of Dr. Allen William Magus (aka Dr. Magus), a scientist ravaged by a war plague disease and kept alive by creating a bio suit; the aftermath of the events revealed on The Key.

On a musical plane, Paradox’s atmospheric, technical, and dark occult death metal blueprint harnesses the energy of The Key and the overall death metal vibe of the early ‘90s in the same forward-thinking way that Nocturnus exhibited. Indeed, Paradox is true sci-fi death metal reclaiming its throne.

With Browning commanding the craft alongside guitarists Demian Heftel and Belial Koblak, bassist Daniel Tucker (ex-Obituary), and keyboardist Josh Holdren — a lineup that also forms Browning’s other band, After Death — the Nocturnus legacy marches on.

Paradox was produced by Jarrett Pritchard (Goatwhore, 1349, Gruesome, Wolvhammer) at New Constellation Studios and features artwork by Timbul Cahyono (Pyrexia, Avulsed, Terrorizer). Boasting the blazing and fervent guitar work agilities of Heftel and Koblak and some of the most carefully-orchestrated keyboard sounds of any Nocturnus-related release to date, all punctuated by Browning’s distinctly devouring vocal incantations, the classic sound of The Key is here wholly revived.

Comments Browning of the release and first single “Precession Of The Equinoxes,” “I think Paradox is a great successor to The Key. I didn’t want to try and compete with what I did on that record or try and recreate it. I wanted to continue with the ideas and themes I never got to do back then. ‘Precession Of The Equinoxes’ is a brand new song that talks about the shifting of the magnetic poles of Earth. And in fact right now the magnetic poles are shifting faster than ever; it has been in the news just in the last couple of months. It happens in 26,000 year cycles, so we humans have never experienced a pole shift to where its effects were recorded. It could be a huge, disastrous occurrence when they shift completely.”

So it’s a continuation in both concept and style?

Yes. It continues the story of “The Key” which was about a man who builds a suite and aliens attack the earth when it’s at a very vulnerable point.He builds a time machine and goes back in time to find this item called The Key which he uses to destroy the alien major. On this next album it continues were he left off.He finds a hidden room under the Spynx and he opens a portal and he is bestowed with all these crazy powers and prepared for when the ancient ones return.

What made you guys decide to mix keyboards with death metal back when you guys first formed?

I always thought the keyboards were the best parts of songs where band’s like Celtic Frost,King Diamond and Morbid Angel used them. Heavy use of keyboards was not really done in metal. In rock it was used a lot with bands like Pink Floyd and Deep Purple, but for some reason metal bands weren’t using it much. Sure Dio would normally use keyboards but they would be low in the mix pretty often. I decided to fix that buy playing death metal with lots of synth.

Metallica Singer To Reunite With Ex-Bandmate After Feud?