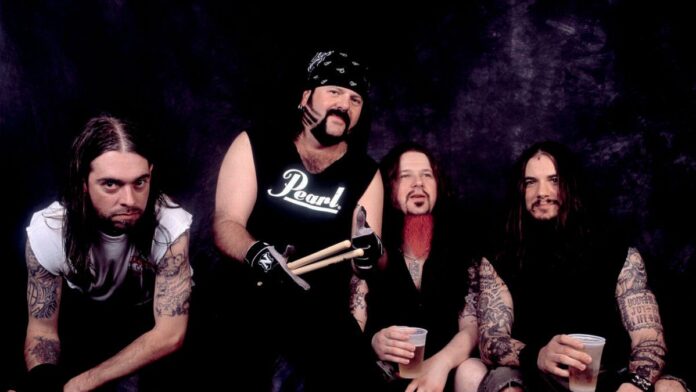 Zakk Wylde and Charlie Benante recently share their thoughts about being involved in the upcoming highly-anticipated Pantera tour. A couple of weeks ago, it was reported that Wylde and Benante, along with Pantera’s surviving members, singer Philip Anselmo and bassist Rex Brown, will tour as Pantera, headlining a number of major festivals across North America and Europe and staging some of their own headline concerts.

Talk about a possible Pantera “reunion” intensified when Anselmo regularly joined Wylde’s Black Label Society to perform Pantera song “I’m Broken” during Down’s 2014 stint on the “Revolver Golden Gods Tour”. That buzz only got stronger after Brown joined the jam on May 23, 2014 when the tour swung through Texas.

Zakk Wylde opens up on the reunion

According to a report by Billboard, Wylde and Benante’s involvement in the project has been approved by the estates of Pantera’s late co-founders, drummer Vinnie Paul Abbott and guitarist “Dimebag” Darrell Abbott. Zakk and Charlie discussed their involvement in the Pantera celebration tour while speaking to SiriusXM’s “Trunk Nation With Eddie Trunk”.

Zakk said: “It’s gonna be awesome. The fellows have always… When Vinnie was still with us, it was always rolling around that, ‘Zakk, would you honor Dime and all of us get together and do this thing?’ And I said, ‘Fellows, whenever you wanna do this thing, I’ll be over here waiting in the dugout and in the bullpen. And just call me when you need me and I’ll learn everything and we’ll go do this.’

“Throughout the years, there’s always been rumblings about it, so it wasn’t until, obviously, now… I was speaking on the phone with Phil — we might have been all on a group call — but Phil was just, like, ‘Zakk, would you honor Dime and would you play?'” the Ozzy Osbourne guitarist and Black Label Society frontman recalled. “And I said, ‘Yeah, Phil. Of course. I’ve always said I would. Of course.’ I said, ‘If you guys wanna go do it, then let’s do it.'”

Zakk revealed his approach towards playing the parts originally written and recorded by Darrell. Zakk said: “You approach it the same way as you do when I’m playing with Ozzy. Obviously I’ve gotta learn [Randy] Rhoads’s stuff and I’ve gotta learn Jake’s [E. Lee] stuff, and when I was doing the [Black] Sabbath stuff, you learn it and do it as faithful as you can. Charlie’s gotta learn all of Vinnie’s parts. You approach it as if you’re in a cover band. When we do the Zakk Sabbath stuff,” referring to his Black Sabbath cover band, “I don’t start changing lyrics midway through ‘War Pigs’. You learn the songs — so that’s what you do.”

Benante concurred, saying: “I can’t go do this as the drummer from Anthrax because it would be a different sound completely. So the way I’m gonna do that is if you close your eyes, it’s gonna sound like it’s Vinnie, basically. And that’s how it’s gonna be… The sound is gonna sound exactly like him.”

Asked when he first got approached about taking part in the Pantera tour, the Anthrax drummer said: “Oh, man. December [of last year]. End of December. I was talking to Philip, and then he just mentioned this. And I said, ‘Oh, yeah, sure. Whatever.’ And then it became real about January [or] February… To this day, if it happens, if there’s one show that’s played, great.”