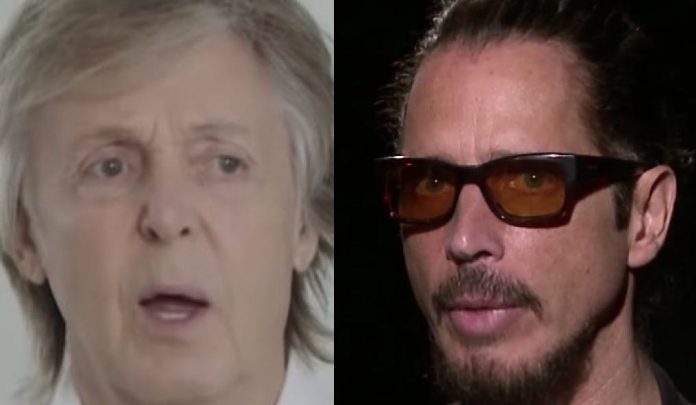 Warren Huart of the YouTube channel ProduceLikeAPro sat down accomplished record producer Michael Beinhorn. Beinhorn has been involved with such artists as Red Hot Chili Peppers, Marilyn Manson, Hole, and Soundgarden to name just a few. Here, Beinhorn discusses how legendary member of The Beatles, Paul McCartney had a major influence on not just Soundgarden but on one of the band’s major hits, “Black Hole Sun.” Cornell sadly feared writing music with a Beatles influence could hurt Soundgarden’s career. Alternative Nation transcribed Beinhorn’s comments.

Beinhorn: I was noticing that we were starting to get off the rails a little bit. That kind of culminated in receiving a demo tape that had eleven or twelve songs on it, all from Chris [Cornell] because he was sending me stuff periodically. I realized that out of all of them there wasn’t one thing on there that would be right for a record and I started to get really nervous. Like, oh shit we are a ways away from getting what we need. So I realized I needed to speak to Chris about it and we had to come to an understanding about what we were gonna do at this point with this record. So, I got on the phone with him and started to realize where he was coming from with the writing he was doing. Chris was really trying to write for Soundgarden and I was like “why would you do that?” You know? You don’t know who these people are, you have no idea what they are looking for, why would you try and please people whose lives you have no connection with?

Beinhorn: Do you know why they are listening to you? They are listening to you because of what you are giving them, like, what they are getting out of your music. not because you’re giving them what they expect. It’s the complete opposite thing, they are along the ride with you, it’s not like, you have to create the ride for them. They’re following. Do something that is amazing and they’ll follow, music that really means something to you. It was something that was completely off his radar. Which was interesting to me.

Huart: Isn’t that artists though, the self-doubt?

Beinhorn: It happens a lot. I think Chris was self-conscious, at any rate, and a lot of thought went into the process, to begin with. I think this really threw him because he wasn’t really prepared for it. I was really suggesting to him “please yourself, please yourself first. Do something that makes you feel right and people will wanna hear it.” That’s all that’s gonna matter. So, I was like, “what music do you like?” and he was like “The Beatles, Cream, etc.” So I said to write something that sounds like The Beatles and Cream. Chris then said, and it’s funny considering what came out of this, but he said: “what happens if it doesn’t sound like Soundgarden?” I was like: “Chris, you are Soundgarden, you and your band are Soundgarden, when you and your band play this song it will sound like Soundgarden because you’re playing it. It’s very simple!” Obviously very hypothetical because I don’t even know what we are talking about song-wise.

Beinhorn: So, three weeks later, I get this cassette tape in the mail, the first song on the cassette is Fell on Black Days, there are two in the middle which are fantastic and the last song which is Black Hole Sun.