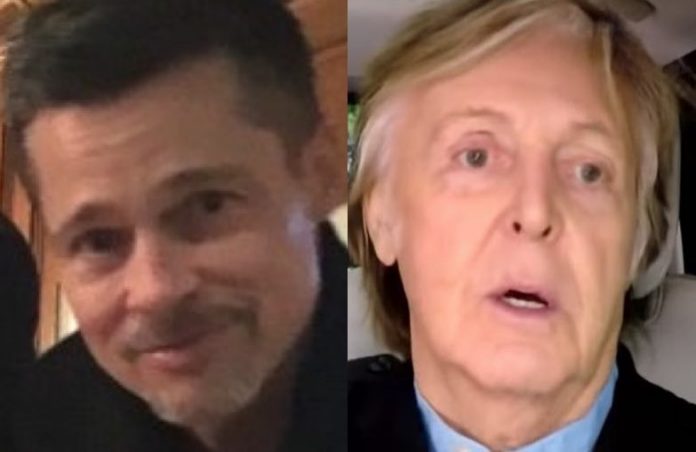 The Beatles icon Paul McCartney has revealed to fans that he wants Brad Pitt to play the lead in a film adaptation of his ‘Hey Grandude!’ children’s book. Kind of painful to know Brad is now old enough to play a grandfather! Paul McCartney’s daughter cried in a recent photo posted. Alternative Nation transcribed McCartney’s remarks.

McCartney said, “Brad Pitt would be the ideal choice to play Grandude in a film. He might need a little bit of makeup and prosthetics here and there, and a hairband, but I think he would be very good, don’t you?”

He was also asked if Grandude has a Grandmammy.

“Well, does Grandude have a wife? That’s a very good question, and I think that might get revealed if there’s another book. At the moment, it hasn’t even been thought of.”

Eeee Cor Blimey wrote about a recent Paul McCartney Grandude book signing on his forum, “Just got back – i hadn’t said on here we got tickets as i was actually unsure i’d able to make it down until a few days ago, as i had something i was really struggling to cancel. But we made it!

Took my 2 year old, he managed shyly to say the queenie eye chorus to Paul who then said it back to him and shook his hand! Course in all this i didn’t get to shake his hand so on the way out felt like a bad mum when i suddenly thought the selfish thought of “oh i didn’t touch him”!! but i’m over it… 😉 (Kind of, my sister was next after me and she got a hug!) So happy my son got to MEET Paul, something i thought would never ever get to happen, what with the age difference and things..”

Paul McCartney recently wrapped up his highly acclaimed North American ‘Freshen Up’ tour that concluded in Los Angeles at Dodger Stadium in July at a show that featured a reunion with surviving The Beatles bandmate Ringo Starr. Paul McCartney’s heartbreaking final photo with John Lennon was revealed recently.