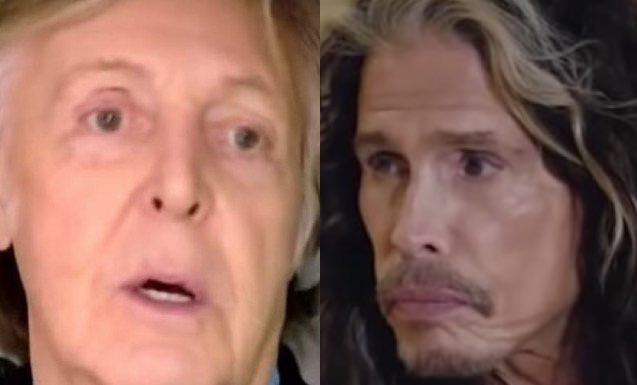 The official Paul McCartney tour blog noted that a recent Arlington, Texas performance by The Beatles legend was a tribute to the master tapes lost in the Universal Music Group fire, including albums by Aerosmith, Guns N’ Roses, Soundgarden, Nine Inch Nails, Guns N’ Roses, The Eagles, Tom Petty and the Heartbreakers, and Nirvana. A lawsuit has been filed by some big names related to the fire, though Steven Tyler and Aerosmith have not yet been connected to it. Below is part of the tour blog:

With that shout-out, Paul dedicated a soundcheck salute to the Lone Star legend: a rendition of Buddy Holly’s ‘It’s So Easy’ that, like most everything else played at soundcheck, made it apparent we were in for a scorcher—literally and figuratively.

By the time the sun had begun to sink low enough to offer the slightest reprieve from the sweltering heat, it was official: Every single show on this first U.S. run of Freshen Up 2019 had shattered box office records. In the case of Arlington Globe Life Park, however, Paul’s show set the record: It would be the first ever major concert event at the home of the Texas Rangers.

As the DALLAS MORNING NEWS noted, the timing of Paul’s first steps onto the Globe Life Park Stage “created powerful memories in Arlington concert on a week when rock music needed them”: Two days earlier a New York Times expose’ revealed the extent of the loss of classic master recordings in 2008’s first at Universal Studios’ storage facility in Los Angeles. With so much musical history having gone up in smoke, a performance like Paul’s at Globe Life Park seemed all the more precious, and perhaps offered some solace to those in attendance mourning the destruction of those vaults’ worth of master tapes.

Paul’s Arlington debut however was a celebration of the memories being created in the here and now. ‘A Hard Day’s Night,’ ‘Can’t Buy Me Love,’

‘Let Me Roll It,’ ‘Maybe I’m Amazed,’ the Quarrymen proto-Beatle classic ‘In Spite Of All The Danger,’ ‘Love Me Do,’ ‘Blackbird,’ ‘Eleanor Rigby’… every note a reminder of how integral and essential these songs are to our every memory—from the kids and grandkids being brought along to their first concert to young lovers to one-time Beatles and Wings concertgoers reunited with Paul for a night.

Even when Paul wasn’t saying it outright, as in the intro to ‘Here Today,’ for nearly three hours he reminded us repeatedly that music and love are gifts to be treasured and shared.

And with that… what more is there to say about Freshen Up’s abundance of memories, but stay tuned for more when we pick it back up with Paul’s return to Petco Park, San Diego!