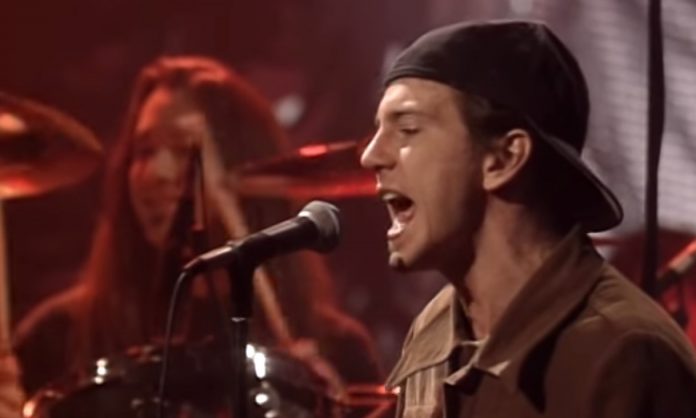 Abbruzzese wrote on Facebook, referring to how Matt Cameron was replaced by multiple drummers including fans at recent shows after getting the virus, “Why couldn’t Pearl Jam just pull some bass players out of the audience, too? Funny isn’t it?”

A fan commented, “Dave! Such a big fan of your work but Colin meow.” Dave responded, “Ahhhh…whatever.”

With the news focused heavily on the Johnny Depp trial which sees him suing Amber Heard for defamation; Eddie Vedder and the rest of Pearl Jam choose to focus on the more positive things in life. Yes, as many are aware of, the rock icon, Eddie Vedder is very good friends with Johnny Depp and has been for some time. In fact, a huge statement was made by Vedder at a recent Pearl Jam show.

We know this because not only did Eddie mention the Hollywood star (and fondly at that), but Eddie Vedder’s wife has also taken to such outlets as Instagram to post up photos of their friend, Johnny Depp with positive quotes.

At the recent Pearl Jam show, a fan on Twitter made note of the actions that Eddie Vedder had taken when it came to talking about Johnny Depp. The fan had the following to state about the recent show as Eddie reminisced on partying with his good friend in the past: “Eddie Vedder did not talk about Johnny Depp’s case, but he DID mention JD as being at Bay Area PJ shows & partying with the band (along with The Stones)! #Justice4JD“