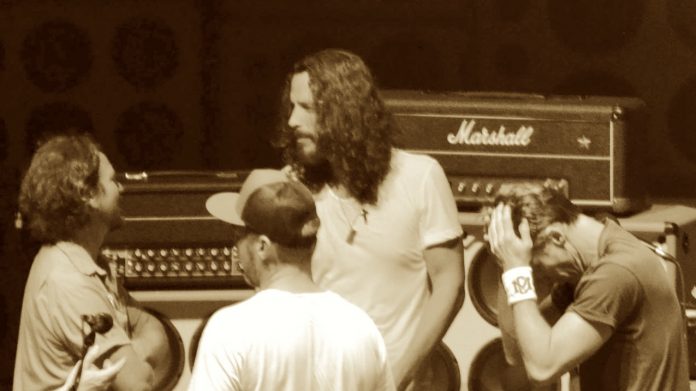 Pearl Jam and Soundgarden drummer Matt Cameron has claimed that the official Chris Cornell Instagram account is run by his widow Vicky Cornell, and that it has now blocked him. Vicky Cornell sued Soundgarden earlier this week over royalty payments and disagreements over the band’s unreleased final album.

A fan wrote to Cameron, “I was unfairly blocked from the CC IG account just for pointing out that comments were being deleted. Including VC own answers to fans who were questioning her. They’re censoring people, and it’s looking really bad…” Cameron responded, “I’m blocked from it too. VC controls that account.” Cameron also said that Soundgarden do not have control of their Instagram account.

Vicky received strong support from Audioslave members Tom Morello and Brad Wilk when she made a social media post discussing her state of mind with the lawsuit, with the pair liking her post, where she said about attacks, “I am shocked at how often this occurs. It’s not just me, or the rock-star widow, or the political widow; it is the case for the vast majority of women after their partners have passed. It transcends socio-economic class, race, and religion. It is an unpleasant and unfortunately all too common theme. Hard-hearted family members, friends, and business associates; who will exploit a widow’s vulnerability when she’s broken and alone. These other people who have decided that her time is up as well.” System of a Down frontman Serj Tankian also voiced his support in a comment.

Shinedown guitarist Zach Myers reacted to Vicky using Chris’ account to post a response to the lawsuit news, writing on Facebook, “Massive f**king eyeroll.” He also commented, “Oh the misleading ‘pat on the back’ comments here are so misplaced.”

He later said she is not well informed on how royalties in the music business work, “She is a wench and always has been. She doesn’t know how royalties work. You can’t receive royalties on unreleased music.”

“She’s trying to cash in on something that can’t be cashed in on!!! She’s taking on Chris’ name without really having a clue who he really was. I’m not saying that I know him by any means whatsoever! I’m just speaking from experience with women of this ‘caliber’ if you know what I mean…” Chris Cornell’s daughter ripped Eddie Vedder’s wife in a comment earlier this week.