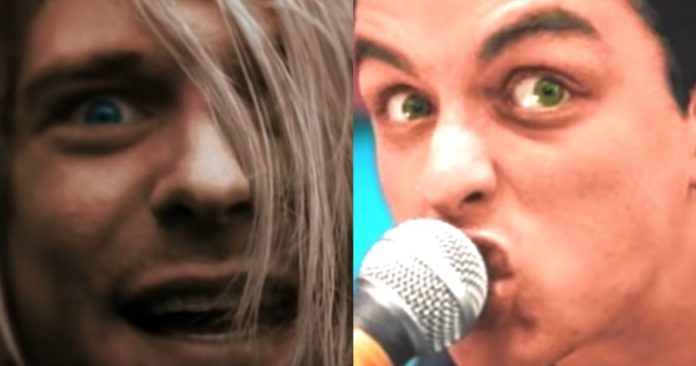 Green Day singer Billie Joe Armstrong was devastated by the loss of Nirvana frontman Kurt Cobain, and he paid tribute to the rock icon with a painfully brilliant rendition of “Lounge Fly” at the Tiki Bar in Costa Mesa, California last weekend with The Coverups. The show also featured Billie Joe’s Green Day bandmates Mike Dirnt and Tre Cool.

Billie Joe Armstrong revealed a tragic Green Day family death earlier this week. Green Day fans discussed “Back in the USA” and its similarities to American Idiot in a new Reddit thread. TheWastedYouth18 posted, “Who else got their hopes up that their current sound would be like this song? I’m not bothered either way if they discuss politics but the sound and lyrics. You can barely hear him in FOAMF. I love the line ‘Let them drink poison and it tastes like lemonade’ There’s no clever lyrics in their new songs so far.”

gdsince2012 responded, “Back in the USA sounds like a song that would fit in on The Longshot album. Maybe that’s why Billie started it, must’ve not fit the vibe he wanted Green Day to have.”

Bluburries shot back, “At the same time, it’s also the closest thing to an AI song in terms of lyrics and vocal melody they’ve released since… AI.” Dinosaur chimed in, “I was hoping for an album sounding more like Back in the USA as well. So far I’m not excited about FOAMF, but I am curious what the rest of the album is like.” Billie Joe Armstrong made a Green Day quitting claim a few days ago.