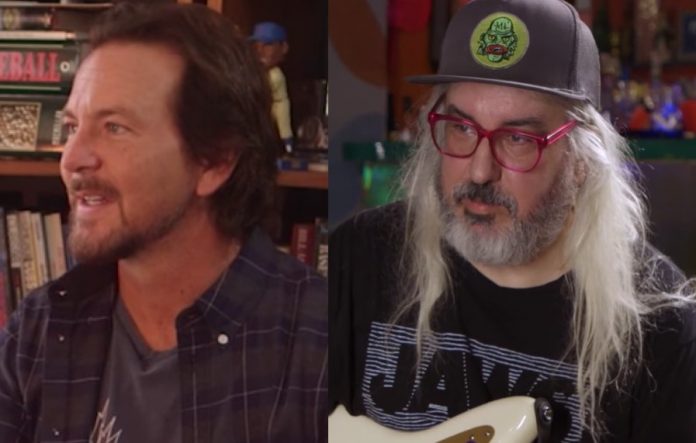 Pearl Jam were joined by Dinosaur Jr. frontman J Mascis in Berlin, Germany on Thursday night. Below is a setlist and recap via Sea and John on the PearlJam.com forums.

Setlist:
01. Wash
02. Sometimes
03. Corduroy
04. Why Go
05. Save You
06. Given To Fly
(Ed says it is very nice to be able to see the audience since they are playing in daylight. He addresses them in German and asks the band when they have been here before. Mike, Jeff and Stone had been here with Neil Young. Ed introduces the band and special guest Danny Clinch. He says the next song is called “Blue Eyed Frog”.)
07. Red Mosquito w/ Danny Clinch on harmonica
08. In My Tree (Up here in my tree / Newspapers matter not to me Fuck Trump!)
(“I hear J. Mascis from the great Dinosaur Jr. is here tonight. J. I am looking for you while it is still light out. This is dedicated to J. Mascis”)
09. Even Flow
10. Wishlist (I wish I was as fortunate as Mike McCready)
11. Habit (“Speaking as a man who despises racism in any form” instead of the normal spoken part).
12. Angie-(Jagger / Richards) Partial cover about 1:20 seconds
13. Daughter / It’s OK-(Cole) – (cover lasts 4 min (I need all of you on this. I need all the girls, I need all the women. I need all the people that love their girls and women. Help me sing it)
14. Deep (During the “doesn’t like the view” section lays on his back with his head hanging upside down over the monitors.)
15. Mind Your Manners
16. Unthought Known
(Ed gives the audience in the pit 5 stars. He says they are gonna play a slow song they can get romantic and he says they won’t play a Ramones song tonight but he wants people to check out the Ramones museum. He continues talking about the Ramones and the audience starts to chant “Hey Ho-Let’s Go”. Okay, I’m gonna play a quiet one.)
17. Lukin
18. Porch-

Encore Break 1
19. Thin Air
20. Thumbing My Way
(Dedicated to someone who is here tonight and they lived in Seattle for awhile. His band never took off. They had a hit in Belgium. So if you are out there tonight Cliff Poncier, this one is for you.-Reference to a character in the Singles film that fronted a band portrayed by members of Pearl Jam.)
21. Breath
22. Do The Evolution
23. Black / Time Heals-(Rundgren) 20 second tag
24. Rearviewmirror

Encore Break 2
(Because of the curfew I want to introduce the next song quickly…my daughters went to the Berlin Wall and we want to dedicate this to Roger Waters and to thank him for educating us)
25. Comfortably Numb-(Gilmour, Waters)
26. Alive
27. Rockin’ In The Free World-(Young) w/ J. Mascis
(Ed thanks the audience and the crew. He thanks the promoter who has worked with them for years.)

Watch video below via PearlJamOnline.