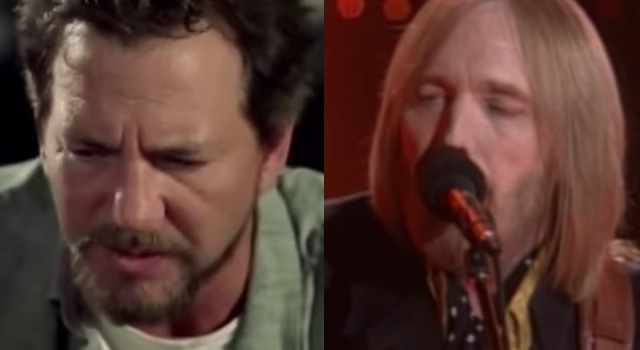 “I Wish Ernie Banks was still with us, I wish Walter Payton was still with us…(he lists several more athletes and announcers).” Ed wants to tell the audience about the guitar he is holding. “I have never taken it onstage before. It was given to me by Tom Petty. I know he had a great time playing here last here. I know the show was special. I want you to know how important it was to Tom and the Heartbreakers…” He asks the audience to light up their phones for Tom, as they played “Won’t Back Down.”

He later said, “Mr. Stone Gossard on the guitar. And we got a big man with a big heart and you know what the means! Mr Boom Gasper.” Ed encourages the audience to vote. No matter the size of the hands or the bank account, we are all equal. Everybody voting is the most important thing we can do. Get the numbers higher than any of the bullshit they can come up with.” Ed slightly references possible vote tampering.