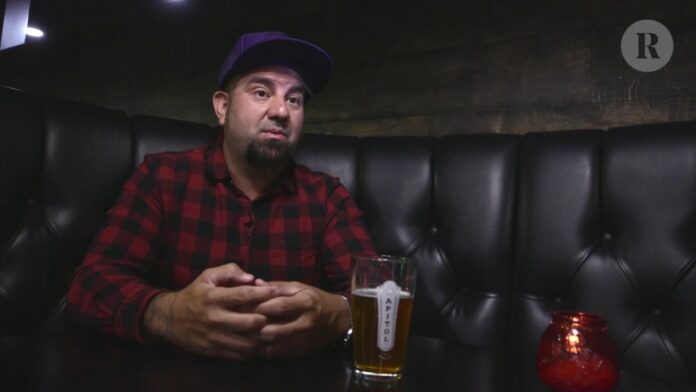 Chino Moreno and other Deftones members are not happy with the pandemic virus rules being enforced regarding social distancing for their expensive VIP meet and greet tickets, which were later changed to a special performance. Chino Moreno isn’t playing much guitar on the current Deftones tour.

SubZero posted a photo on the Deftones Reddit, “What to expect with “VIP” package chino even said “this is stupid” when they made us take photos like this virus rules but everyone crowd didn’t need a mask).”

Defston3d responded, “Yeah Abe apologized multiple times in Seattle. I’m for sure not thrilled about the change. They played 3 songs for us in Seattle though and ya know – I’m happy I went anyway. They are my favorite and I want to see them play as much as I can. F**k [the virus], F**k Ticketmaster, and f**k VIP Nation. Still love the boys though.

TheConstipatedCowboy said, “In all honesty this seems like one of those clusterf**ks that is out of one or two peoples’ specific control. I can’t imagine the band wanted their first tour in 2 years to roll out this way. Even the Sergio fiasco seems more a product of shit management with the exception of Chino’s ‘outta pocket’ comment. Hard to blame the band for being so huge that dumbass lawyers run things.”

Stevenstorm505 wrote, “Jesus Christ, for 500 f**king dollars, a 2 year delay and a cancelled meet and greet I would expect that the photograph taken would actually look good and be done by a professional. This looks worse than photographs high school students take in intro to photography.

It’s also weird that Chino would say ‘this is stupid’, aren’t they the ones that decided to do this? Regardless if it’s because of Stephen or because they wanted to avoid meet and greets to not answer questions about Sergio, did they not really think a head of time how stupid and shitty changing it to this would be for everyone that bought the package expecting and wanting a meet and greet?”