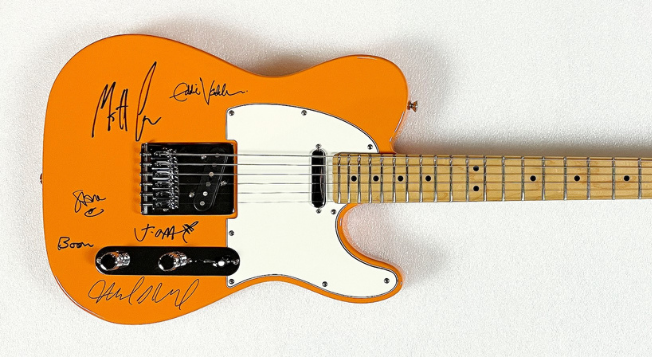 Pearl Jam have donated a signed guitar to Charity Buzz to benefit Seattle’s MoPOP Museum. Bidding is currently at $9,000.

Pearl Jam had sold more than 85 million albums worldwide by 2018, including nearly 32 million albums in the United States by 2012, making them one of the best-selling bands of all time. Pearl Jam was inducted into the Rock and Roll Hall of Fame in 2017 in its first year of eligibility. They were ranked at No. 8 in a reader poll by Rolling Stone magazine in its “Top Ten Live Acts of All Time” issue. You can bid here.

Additional Lot Details:
This piece is new.
Guitar comes with a padded black Fender gig bag case,
Includes a certificate of authenticity.
Lot #2132102
Rules & Regulations
In condition as donated.
Cannot be returned or exchanged.
Additional shipping charges may apply based upon the location of the winner.

Members of Pearl Jam are set to appear and perform at Seattle’s MoPOP Museum’s tribute to Alice In Chains this week. Matt Cameron will be featured as part of a surviving members of Soundgarden performance with Tad Doyle. Pearl Jam recently confirmed a big name rejected joining the band.