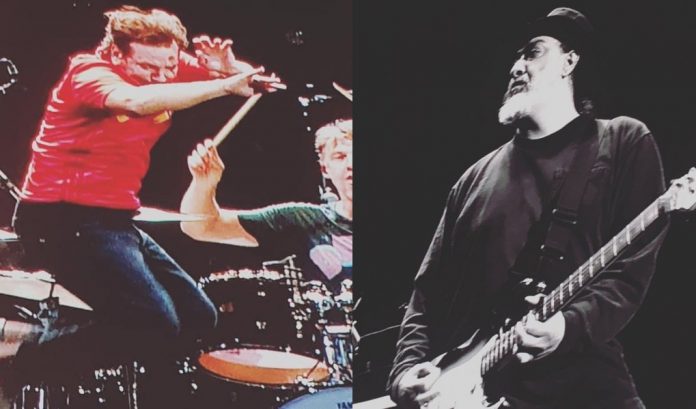 Soundgarden guitarist Kim Thayil joined Pearl Jam onstage at the Rock Werchter festival on Saturday with his MC50 bandmates to perform “Kick Out The Jams”. You can watch video below.

Setlist:
01. Elderly Woman Behind The Counter In A Small Town
02. Animal
03. Mind Your Manners
04. Do The Evolution
05. Interstellar Overdrive-(Barrett, Mason, Waters, Wright) (instrumental about 1 minute)
06. Corduroy
(Ed addresses the audience in Dutch. He is pretty excited about the line up for the festival. Pearl Jam has played it five times but Matt has played here seven times including Soundgarden. Ed then introduces the great guitarist and philosopher Kim Thayil as well as the legendary Wayne Kramer. The rest of the band gets introduced.
07. Kick Out The Jams-(Davis, Kramer, Smith, Thompson, Tyner) w/ Wayne Kramer-guitar, Kim Thayil – guitar, Dug Pinnick – bass, Brendan Canty – tambourine, Marcus Durant – vocals.) Ed and Marcus share vocals. Jeff, Mike, Stone and Matt all played their normal instruments.
09. Habit
(Ed talks about being positive and the light from the young that will hopefully grow)
10. Given To Fly
(This one was written in the streets of Seattle and is for people in the streets everywhere)
11. Can’t Deny Me
12. Wishlist
(Dedicated to the great Jack White and his band)
13. Spin The Black Circle
14. Why Go
15. Jeremy
16. Lukin
17. Porch (EV climbs down to the barricade)
18. Imagine-(Lennon) full band w/ Jack Johnson
19. Once
(Ed congratulates the Belgian football team in Dutch. Apologizes for pronunciation. Wants to play the Ramones for the team)
20. I Believe In Miracles-(Ramone, Ray)
21. Black
22. Rearviewmirror

Encore Break
23. Alive (Mike goes to the barricade and rocks out)
Mike starts Yellow Ledbetter but Ed wants to play another song first
24. Baba O’Riley-(Townshend) (Ed puts on a Belgium football team jersey)
(He thanks the audience and wishes the Belgium team well.)