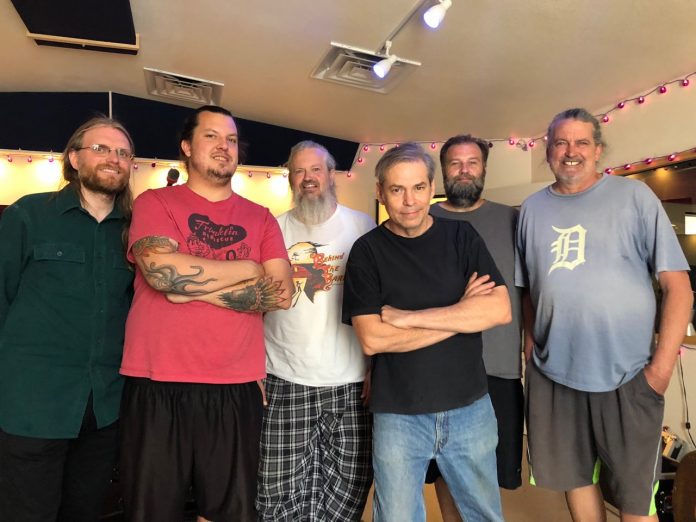 After the original line-up of the Meat Puppets split in 1996, not much was heard from drummer Derrick Bostrom – when the Kirkwood brothers, Curt and Cris, reunited in 2006, they opted to enlist the aid of two drummers, first Ted Marcus, and then, Shandon Sahm (although Derrick did come out of hiding to speak to little old me for the book, Too High to Die: Meet the Meat Puppets, in 2012). But after the Puppets were inducted into the Arizona Music & Entertainment Hall of Fame in November 2017, Derrick reunited with his old bandmates for a performance, and it will seemingly not just end there, as it has been announced that…Bostrom is back! Cris spoke to Alternative Nation to give the scoop about the re-teaming of the original Meat Puppets, and also, who else is included in the line-up and future plans.

It was a surprise to find out that the band had reunited with Derrick.

It’s so far out. It’s just mind-blowing. It all came about last year from that Hall of Fame thing – we got put in the Arizona Hall of Fame, and we actually played at the induction. A local promoter put on a show. That opened the door to us getting back in touch – because we hadn’t been in touch with him for so long. But he’s always kept track of what’s going on, and he’s been kind of involved behind the scenes, somewhat – he’s always been the band’s annotator. Just keeping track of what’s been happening with Curt and I. But that got us in touch, and we decided to play with him, so we got together and played before the thing one time – he hadn’t played in a long time, I guess. It was just so fun – the three of us. Goddamn, it was a unique experience. It was the psychedelic fuckin’ time machine – mind-blowing. Then we did our show in town the day after Thanksgiving, and it was the week that Charles Manson and David Cassidy passed away, so we did a Charlie song and Partridge Family song medley, and Derrick played on that. From about then, he realized he was looking to get back into playing, but he didn’t want to push anybody out of the picture. And at the same time, it just worked out – Shandon [Sahm] decided he wants to spend time in Europe. He pretty much moved over to Amsterdam. It just worked out all serendipitously. Suddenly, Derrick’s back in the picture.

And the band is working on a new album with Derrick?

We’re working on a new album. We started recording a new record in January, and that’s a really cool project. Curt decided to move forward with a new record, because he got together with Ron – Ron Stabinsky, the keyboard player that we played with a little bit, from Pennsylvania – and Curt liked so much what they did. Ron was out in Austin with one of his projects, Curt went and saw that, and then got together with Ron. They went into the studio and were jamming, and Ron has come out there over the last five or six years, and we’ve farted around and done some different stuff, and Curt had some pieces that he put together to extrapolate on. And he dug that so much, that he decided to move forward with a new record. So, we did that in January. Suddenly, Derrick comes back in the pictures, and the material on the new record is right up Derrick’s alley in a way. We got him the stuff that we’d tracked so far, he got his head around it, and we started playing in town – me, him, and Elmo. He came in and knocked out all of his tracks on the whole record in one day. He’s really playing up a storm. And it’s Derrick – it’s still Derrick, definitely. It’s completely him. And he’s a different guy in some ways than he was when we were younger. Really playing well. It’s really fun.

Plans to tour with Derrick in support of the album?

Yeah, whatever we can do. He’s still working – he’s got a career and he still has his job. It will be within the constraints of what he is able to pull off. But this last weekend, we did Summerfest with him, and a small show in Chicago, and it was just so much fun. It’s a different animal with Derrick playing. And Ron played at both of those shows, so it’s a five-piece. He’s definitely down for doing it on the weekend. I don’t know how much long tours he will be able to do, but it fits in with us not really feeling like doing anything real extensive at the moment, anyways. But for sure, we will have to do some stuff in support of the record – it’s such a good record, Jesus. This thing is so badass. Ron is all over it, and suddenly, Curt is writing to the band in a way. With Derrick back in, it’s a different band. Some really great Curt work. Really wonderful. And Elmo is on the record, as well. And we’re recording it in Phoenix, with this guy, Jeremy Parker, who I’ve been doing all this producing with – I’ve been making all these records for this guy here in town with a local label, and some other stuff, as well. The guy is such a good engineer – notably, he did those Evanescence records and some other real big records. But he’s from here originally, and he came back, got a partner, and opened up a nice, small studio here in town, that’s reasonably priced. Curt heard some of the stuff that I’d done, and he asked if I thought he would dig this situation, and I told him I thought he would. It turns out he definitely does – he likes Jeremy and digs what the guy does. It’s just a fucking cool record.