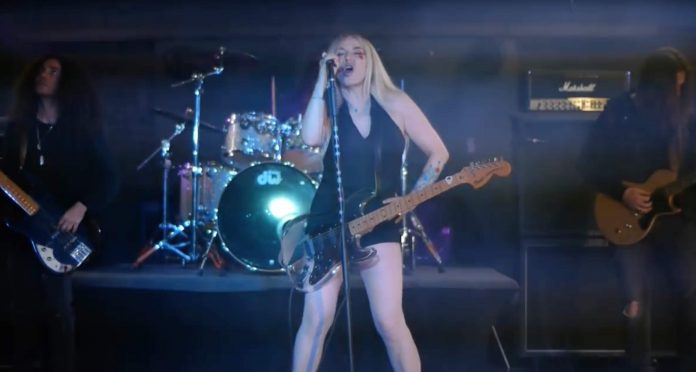 Betty Moon had a huge 2017 with the release of her 8th studio album Chrome, and she it looks like 2018 could be even bigger with her latest video release.

Alternative Nation is proud to premiere Betty Moon’s new music video for “Natural Disaster.” The song has a sexy rock and roll grit along with an incredibly catchy melody. The guitar has a crunchy feel that White Stripes and Black Keys fans will love. There’s a stomp along rhythm, and a sexy bassline that makes the track sound totally unique.

Lyrically the track has themes of isolation and anxiety, and desperately wanting to escape being a ‘natural disaster.’ If there’s any justice in radio, this will be a top 10 alternative hit. The song’s mix is fantastic, strongly emphasizing Betty’s voice and soaring hooks, and giving space to each instrument. Garbage and Hole fans looking for a great 2010’s alternative rock voice will really gravitate to Betty Moon and “Natural Disaster.”

The video is largely performance based, with fun visuals from the streets of Los Angeles sprinkled in.

“Natural Disaster” appears on Chrome, Moon’s best album to date featuring other hits like “Sound” and “Life is But A Dream.”

On Chrome, she touches on themes about her new life in Hollywood after relocating from Toronto.

Moon said regarding the record, “The idea behind CHROME was to project a beautiful, destructive and sexy concept of what life can be like when there is nothing holding you back. The drama, success and passion for music all come together with this album. Each song was pieced together to tell a story that is bigger than you could imagine.”