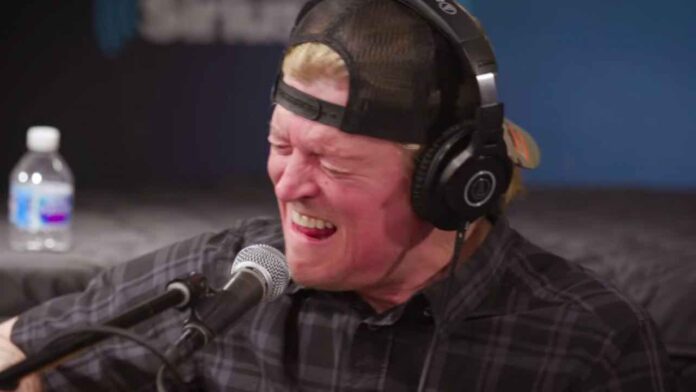 The Darkness vocalist Justin Hawkins recently talked about Puddle of Mudd’s cover version of a Nirvana classic that spread like a fire a couple of years back. The 47-year-old British-born rocker who currently lives in Switzerland offered his assessment of Puddle of Mudd frontman Wes Scantlin’s 2020 rendition of “About A Girl” via his YouTube series “Justin Hawkins Rides Again” where he shares a mixture of serious musician analysis and fun hot takes to his 112,000 subscribers.

Justin Hawkins reacts to the song

Puddle of Mudd’s acoustic performance of the track at the SiriusXM studios was uploaded to YouTube in January 2020 but didn’t blow up on the video-sharing platform until three months later, with detractors blasting Scantlin’s off-key take on the iconic song.

Hawkins recently took to his YouTube channel to share a nine-minute reaction to Puddle of Mudd’s version, explaining in the accompanying notes: “Today I’m reacting to a video that has received a lot of ridicule. It’s the Puddle of Mudd cover of Nirvana’s ‘About A Girl’. However, I’d like to react to it from a more sympathetic point of view and tell you why maybe it’s not that funny at all. What do you think? Is it wrong to laugh at this or is it just funny?”

In Justin’s video reaction, which can be seen below, he says in part: “I don’t know enough about this band, I don’t know what’s going on with him, but it looks like when he’s gearing up to sing even the first line, it kind of looks like he’s in a bit of pain. When it gets inside your head like that, you’ve got no chance.

“You can really see the singer from Puddle of Mudd, his face is like this [adopting a pained expression], and that’s before he’s even sung a note,” Hawkins continued. “So his head’s in the wrong place, as it were. He’s already sort of playing out how these challenging high notes are gonna be, how they’re gonna feel. And I imagine his voice is tightening up. When you get that sort of tension that manifests itself [in the throat] when the problem is actually in [your head].”

After listening to more of Scantlin’s attempt at some of the high notes, Hawkins added:

“I think he’s ill. Maybe he’s tired. Maybe it’s one of those ones where he’s in the middle of a tour and he’s really, really overtired. Maybe he’s damaged his vocal cords a little bit and he can feel he’s not in the right place… And you can see in his face that this is excruciating for him. He’s getting nothing from his bandmates. He shouldn’t be doing this, basically — he really shouldn’t. I find it really difficult not to sympathize with him… I can’t even listen to it. He shouldn’t be doing it. Poor guy. Give the man a day off — or 365. Give him a year off. That’s it. Have a year off.”