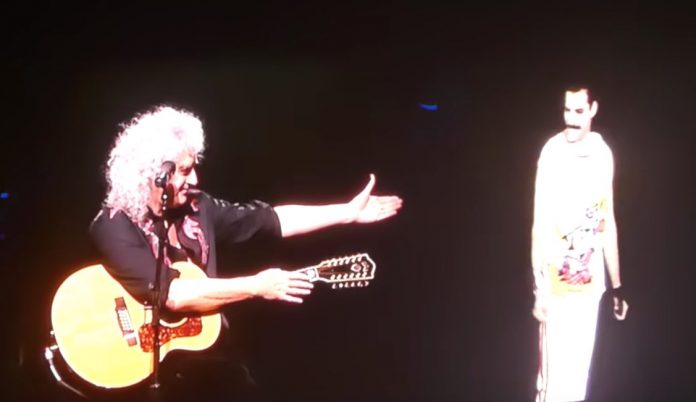 Queen guitarist Brian May has unloaded on a critic for calling the band a ‘tribute act’ for touring with Adam Lambert replacing the late Freddie Mercury as lead singer. Just yesterday, Brian May made a disgusting accusation about someone stealing from Freddie after he got AIDS.

“Me and my Bro’ say THANKS San Jose for a great welcome tonight. Me and my Bro’ might disagree about anything you care to name, but we have learned mutual respect over the years, and somehow when we play together, some kind of magic still happens. All hail Rog !!! We are proud of what we are, an ouvre we have worked for nearly 50 years to create and constantly update. I have to say that being called a ‘tribute band’ by some half-assed critic in the local paper is an insult I will not quickly forget. We don’t need your condescension, Sonny Jim. That’s my life’s work you’re dismissing there. I guess you’re the only one who didn’t really ’get it’ in that wonderful rockin’ crowd tonight in the good ol’ SAP Center. I can still hear your roar, folks, ringing in my ears. Bless ya’all.”

Brian May recently wore a creepy mask at a Queen show. He also wrote, “And here is the Modern Marvel without whom, for sure, Queen would not be out here delivering at the top level. ADAM LAMBERT is only now beginning to be recognised by the greater public as the true phenomenon that he is. Gifted with a voice in a billion, for himself he is a passionate and unyielding perfectionist. Gifted to us, he is the reason that we are still alive as a functioning rock band. And still able to take on new challenges. Plus … he’s nice. That’s a big deal when you’re a touring family.

Freddie would approve, big time. TONITE !!! For One Night Only ! San Jose !!! Are ya ready ?!!! 💥💥💥💥 THANKS @ALAlwayz on Twitter for this photo. 💥💥💥💥💥 Also, and I will say this only once, for the benefit of just a few people who haven’t stopped to think clearly. Just imagine how awful it would have been for Roger and myself to tour with a Freddie impersonator. Anyone who suggests such a thing doesn’t belong here. To the vast majority of you lovely people out there – BIG THANKS for being respectful to Adam. In supporting him, you are supporting the life blood of the live Queen legacy. Nothing is forever. This is a precious moment. We never pass this way again.”