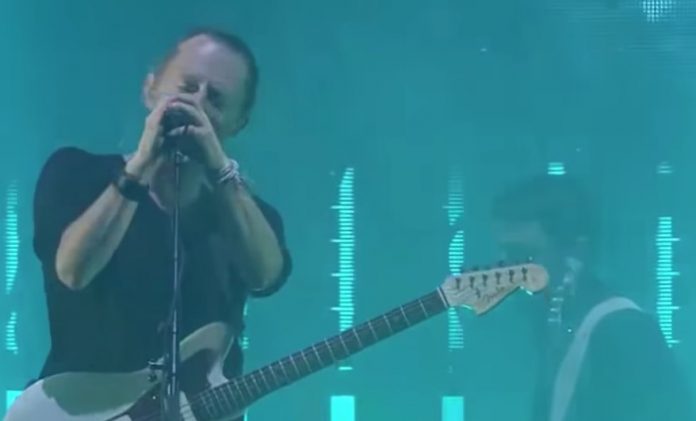 Radiohead guitarist Ed O’Brien addressed Thom Yorke and his other bandmates no showing their Rock and Roll Hall of Fame induction during his speech on Friday night at Barclays Center.

JMH1982 posted on Reddit: “Ed O’Brien Quote from RRHOF speech – ‘This IS a big fucking deal and I wish everyone was here to share this.'”

“More just sad that they couldn’t see that it was not at all like a VMA’s or Grammy’s and more a respectful appreciation of their career. Ed very lovingly thanked his ‘brothers’ in the band.”

“We’re certainly not the most media friendly of bands,” Selway joked on-stage during Friday night’s ceremony according to Vulture. But just because the whole crew didn’t attend doesn’t mean the honor didn’t hit home. “This is a beautifully surreal evening for us,” O’Brien added. “It’s a big fucking deal and it feels like it .. I wish the others could be here, they would be feeling it.”

“Radiohead can be an awkward and challenging band to be in,” Selway said according to Consequence of Sound. “We may not be the greatest musicians around, and we’re certainly not the most media friendly of bands. But we have become very adept at being Radiohead, and when that connects with people it feels amazing.” Selway said “each new song has been a blessing” and their albums “act like a chart of our learning process.”

O’Brien said, “I want to thank [my bandmates] for the musicians that they are .. but most of all, I want to thank them for this deep, deep friendship.”

Thom Yorke said in January about the Rock and Roll Hall of Fame, “We’ve always been very blasé about that stuff. We just think that we just don’t quite understand it.”

“We’ve had it explained to us, so it’s cool. But we don’t really understand it as English people.”

RADIOHEAD IS INDUCTED IN THE ROCK & ROLL HALL OF FAME!! 👏🏻👏🏻👏🏻 I’m beside myself with love and happiness. ❤️ Thank you to the legend, David Byrne, for a great speech! #RockHall2019 pic.twitter.com/R76jVkgyIb