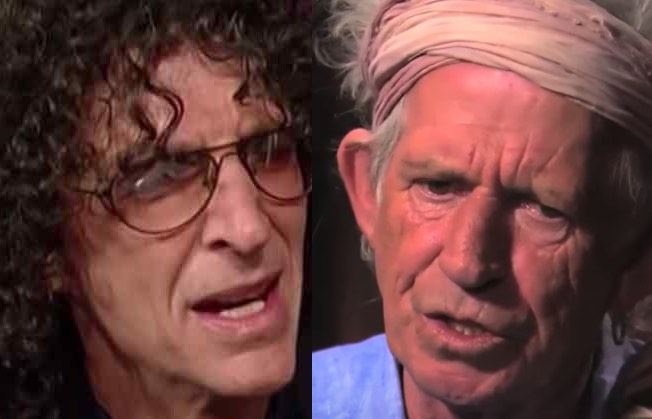 Howard Stern said he would be ‘livid’ and ‘bitter’ if The Rolling Stones guitarist Keith Richards outlives him on his show this week.

MarksFriggin.com recapped: Howard said he played the announcement about Alex Trebek’s cancer and he was making him look bad. He said he’d just go away if he had cancer like that. Robin said Howard would make an announcement. Howard said Alex posted another video where he thanked his fans for their support and well wishes. Howard said he’s putting out more product than Olivia Jade. He said he would not be doing that if he were him. He said he’s making the best of it. Howard played a clip of Trebek thanking his fans for their support.

Robin said they sent him nothing. Howard said even Watson the computer sent him a get well card. He said he gets a stubbed toe and he’s miserable. He said he does admire this guy. Howard played more of the clip and Alex was saying he reads everything that he gets. Howard said he reads nothing himself. He said it all goes in the garbage. Alex said he’s a lucky guy. Howard said he’d be asking ”why me?” He said imagine you eat healthy all your life and then you have something like this happen. He said that he’d be wondering why that fat bastard High Pitch Erik is still around. Howard said he’s meticulous about what he eats and this is what it gets you.

Howard made up his own video where he’d be asking why he’s dying and Charlie Sheen is still alive. Howard said that’s what he’d be asking. He said in terms of game shows Bob Barker is out living him. He said OJ is walking around healthy as a horse. Howard asked how old Alex is. Robin said he’s 70-something. Gary said 78. Howard said he looks good. He said he can’t believe he has pancreatic cancer. He said Valerie Harper was supposed to die 10 years ago. Howard said he’d be making a really bitter tape.

Howard said he would be livid if Keith Richards outlived him. He said the bitterness he’d have is unbelievable. He said Alex has none of that. Robin said maybe they’re getting upset about something and Alex knows he has something treatable or something. Howard said Jimmy Carter had brain cancer and now he’s the longest living ex-president. Robin said they told him the brain cancer was goodbye for him.