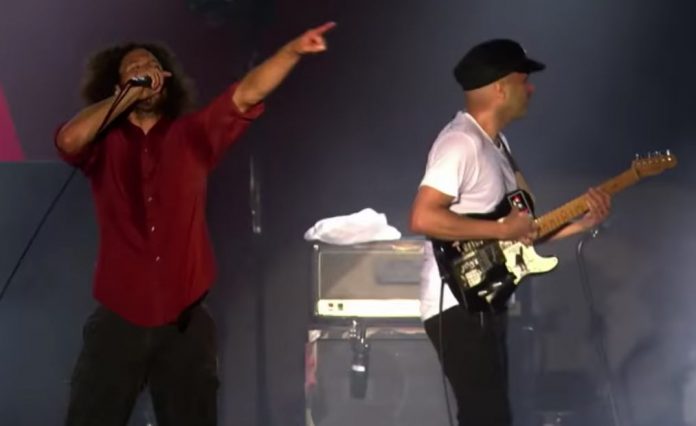 Rage Against the Machine went from fighting the system to telling you get vaccinated and men can give birth🤦‍♂️ pic.twitter.com/xRR30zAZ6Y

The comments come after Rage Against the Machine made some remarks regarding the controversial decision of Roe v. Wade. The alternative rock band returned to the stage for their first performance in 11 years and did not mince words when expressing their anger about the Supreme Court overturning Roe v. Wade.

During a show Saturday at Alpine Valley Music Theatre in Wisconsin, the band broadcasted several captions on a screen on stage blasting the high court over its decision to reverse the 1973 ruling on abortion rights – with one caption going as far as to suggest an elimination of the court, the Milwaukee Journal Sentinel reported.

In addition to speaking out in favor of abortion rights, the captions touched on a number of other hot-button issues, including a reference to women as “birth-givers” and highlighting the rate of child gun violence victims.

“Forced birth in a country that is the only wealthy country in the world without any guaranteed paid parental leave at the national level,” one caption read.

Lead singer Zack de La Rocha yelled out “freedom” repeatedly as another caption went across the screen that read, “Forced birth in a country where Black birth-givers experience maternal mortality two to three times higher than that of white birth-givers.”

“Forced birth in a country where gun violence is the number one cause of death among children and teenagers,” another caption read.

The band’s sequence ended as a bold caption went across the screen that read, “ABORT THE SUPREME COURT.”

The performance comes just weeks after the Supreme Court ruled that women do not have a constitutional right to an abortion, meaning states can now make their own laws pertaining to abortion rights.