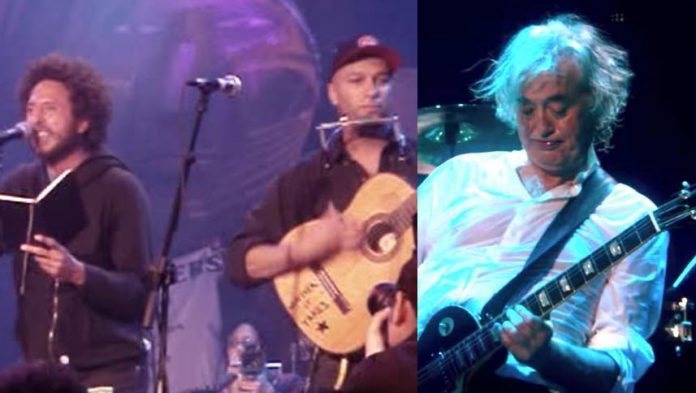 “This is my longtime Telecaster… when I learned how to do the sort-of grunge tuning [drop D], I needed a guitar to do it. So, I traded with my roommate at the time. He had this Telecaster and I had a 50-watt Marshall head.

“We made an even swap and from that day forward, I started, you know, doing the drop-D tuning. This guitar was played on every drop-D song I’ve made.

Some of your heaviest riffs – ‘Cochise,’ ‘Freedom,’ ‘Killing in the Name,’ they’re all made with single coils?

“It’s all single-coil pickup, yeah. That’s the thing – one of the things, I think – that made both RATM, Audioslave, and my riffs wherever they occurred, heavy in a different way, kind of like Jimmy Page, where they’re springier and they’re funkier and they make, you know, 50,000 people jump up and down more than just, sort of more traditional super-metal double-humbuckers thing.

“So, this guitar, it’s fully stocked, I put some stickers on it, it allowed me to do a number of things. For example, the riff ‘Killing in the Name’ was played on this guitar.

“And when you do the Drop D tuning, it just sort-of reconfigures the fretboard, makes you think differently, put your finger on a dot – that sounds different when you’re in Drop D.

“I was actually giving a guitar lesson to a fairly accomplished Hollywood guitar player back in the earliest days of Rage Against the Machine, and showed him how to tune in Drop D and then demonstrating it, I did exactly what I just told you.”

Why did you stop at Drop D and not explore further tunings?

“There are some drop-D songs, but then, I’m a sort of a traditionalist in a way, and when people start going Drop Z-, I thought, ‘I’m going to let them have that all for themselves.'”

What strings do you typically use?

“I have 10s on this. To help it stay in tune with the drop, there’s always 10s on. It still gives you enough bendability up there to be able to be kind of slinky and dexterous while at the same time holding down.”

Do you typically ride in the neck position?

“100 percent of the time I’m in that position. I don’t know why, the riffs to me felt, like, kind of funkier and springier and heavier down there, and all my guitars it’s always there unless I’m playing some shredding. Even this guitar, when I do the solos it’s always the rhythm pickup.”