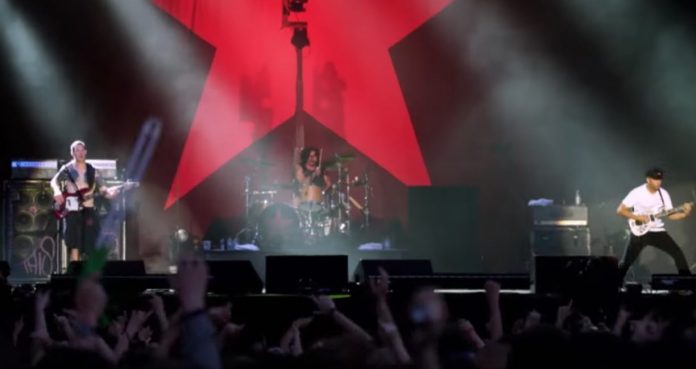 In a new Relix interview, Tom Morello revealed that he and Rage Against The Machine bandmates Tim Commerford and Brad Wilk have a half finished new Prophets of Rage album.

The Atlas Underground tour is also quickly coming into focus. Morello wants each performance to be a “holistic experience,” and while he doesn’t plan on bringing any of the album’s guests on the road, he has enlisted creative director Sean Evans (who spearheaded Roger Waters’ recent Us + Them outing) to create something that’s “more art-installation than traditional rock-and-roll show.”

And Prophets of Rage, Morello’s Rage Against the Machine crossover project with Chuck D and DJ Lord of Public Enemy and B-Real of Cypress Hill, is also waiting in the wings. “We’ve recorded about half a record’s worth of material and, when we get home, we’re going to figure out the plan,” he says.

No matter what he’s working on at any given time, Morello remains dedicated to his longstanding mission of raising political consciousness through music. “These are really desperate times that demand desperate songs,” he says solemnly. “I’ve always thought my responsibility is to weave my convictions into my vocation. As a guitarist, as a songwriter, as an artist, that’s where I am. From Rage Against the Machine to The Nightwatchman to Prophets of Rage to The Atlas Underground, that’s where I plant my flag.”