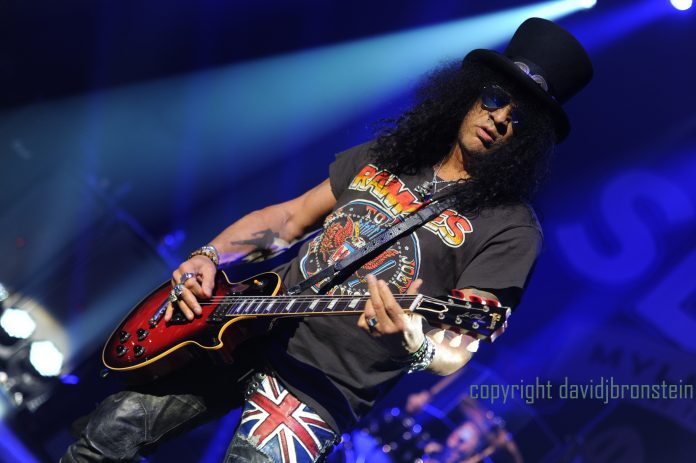 There is one thing in this life that is a true certainty and that is that Slash likes to tour. You could go as far back as the early 1990’s and watch Slash being interviewed about how he loves being on the road, and even two decades later, despite having a family little has changed for the rock n’roll icon in that time, he loves to play live. So when Guns N’Roses ‘Not In This Lifetime’ tour ended late last year after two and a half years featuring 159 shows that lasted 3 hours each night, Slash did what he knows best and went back out on tour.

This European tour is in support of 2018’s latest album for the band ‘Living the Dream’ and it’s easy to know when you see the band on stage, all smiles where that title has come from. The last time I caught the band was in England at the Download Festival in 2015, and in 3 short years they have come a long way. This is evidenced in the fact that at Download the band played 4 Guns N’Roses covers. Here and on their tour only ‘Nightrain’ has been played. It’s no secret that ‘Nightrain’ is one of Slash’s favorite songs to play live but this is a band that now stand firmly on their own two feet with the majority of songs coming from their records, and this is a tour that has confirmed the validity of this band as a whole and not just a side project. Fans are screaming the lyrics out to the bands songs and the band can feel the energy and enthusiasm coming from the crowd.

They open with ‘The Call of the Wild’, which is also the first track from their new album. ‘Halo’ comes next and already the band have the 3,000 sold out crowd in what is a beautiful setting in the heart of Brussels in the palm of their hands. ‘Ghost’ and ‘Back From Cali’, Slash’s own songs get live airings and along with the crowd, Slash’s other half Meegan is rocking by the side of the stage.

Myles Kennedy deserves a lot of credit and his voice is very strong here, he has become quite rightly one of the best rock front men of the 2010’s and has a natural chemistry on stage with Slash. It is no surprise when later on the two hail each other. Kennedy tells the crowd to give it up for the one and only Slash, but Slash is quick to ask them to save some of their energy and cheer along to Kennedy who has been phenomenal also.

It was also nice to see Todd Kearns take lead vocals for two tracks, the catchy ‘We’re All Gonna Die’ and ‘Doctor Alibi’. While each member makes this band work the main draw for many fans is seeing Slash live in the flesh. Many of the fans aren’t even from Belgium and have travelled throughout Europe to be here tonight, some from Italy, England, France and I meet a couple from Holland who are pushing into their 60’s and loving every minute of the show. Slash is a rock icon and his music really does have the gift to bring kids and elders alike in one room.

Whilst Slash with his famous licks will always be a draw this comes to ahead for the end solo to ‘Wicked Stone’. Marked on the setlist is to use the ‘tobacco’ guitar and out it comes for a quite glorious guitar solo that defines the world epic. We’re not talking a 3 minute solo here, but a 15 minute one. In my near 30 years of attending gigs including witnessing Slash play with Guns N’Roses on the bands infamous ‘Use Your Illusion’ tour nothing comes close to this solo which is straight from Slash’s fingertips to our hearts. It leaves the crowd stunned and reinforces the fact that Slash is the greatest hard rock guitarist in the world today.

The band wrap up the night with four classics, ‘You’re A Lie’, ‘Starlight’, ‘World on Fire’ and finish up with perhaps the bands most famous and well known song ‘Anastasia’. Over 2 hours of music played to happy ears and Slash of course will keep on touring. Indeed he will be back with his band in Belgium this June for the Graspop Festival and his European tour wraps up next month.

This summer the band will play in North America and Europe on the festival circuit. So if you have missed these first batch of dates then count yourself lucky that you get another chance. If you did catch these shows, then you’d be crazy not to take a second dip.