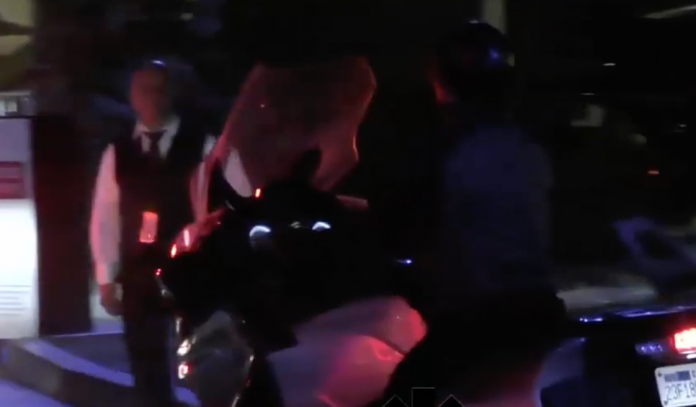 Red Hot Chili Peppers frontman Anthony Kiedis was filmed leaving Staples Center after the Los Angeles Lakers vs. Houston Rockets fight over the weekend, which started with players on both teams going at it. Kiedis sped off on his motorcycle in a newly uploaded video. USA Today previously reported that Kiedis was kicked out of the game after angrily yelling profanity at Chris Paul, but TMZ is reporting that Kiedis was not ejected.

“9:49 AM PT — Sources tell us Kiedis was NOT ejected from the arena. He was allowed to calm down and then returned to his seat.

Red Hot Chili Peppers frontman Anthony Kiedis LOST HIS DAMN MIND at the Lakers game on Saturday — cussing out a Rockets staffer following the brawl on the court … and TMZ Sports has the video.

As Chris Paul was being escorted off the court, Kiedis — a Lakers superfan — was screaming at him from his courtside seats.

A Rockets staffer came over to verbally check Kiedis — but Anthony wasn’t having it and lashed back. Witnesses say Kiedis flipped the guy off and shouted, ‘F**k you.'”

Red Hot Chili Peppers bassist Flea has posted a reaction to his bandmate Anthony Kiedis being kicked out of a recent Los Angeles Lakers vs. Houston Rockets NBA game. Kiedis was filmed appearing to get in a verbal fight with Chris Paul, flipping him the finger and being restrained before being ejected from the floor.

Flea wrote, “At the lakers game last night with my dear brother. It Got crazy at the end, but man I get so satisfied, deeply drinking in the depth and beauty of the game. People operating at a high level in so many dimensions. Cerebral, physical, spiritual, emotional, unspoken and telepathic communication. I truly love basketball with my ❤️❤️❤️ this photo by my brethren @atibaphoto.”

How you gonna throw out a LA Legend? Anthony Kiedis a real one too.
pic.twitter.com/5sWz9ECcEQ