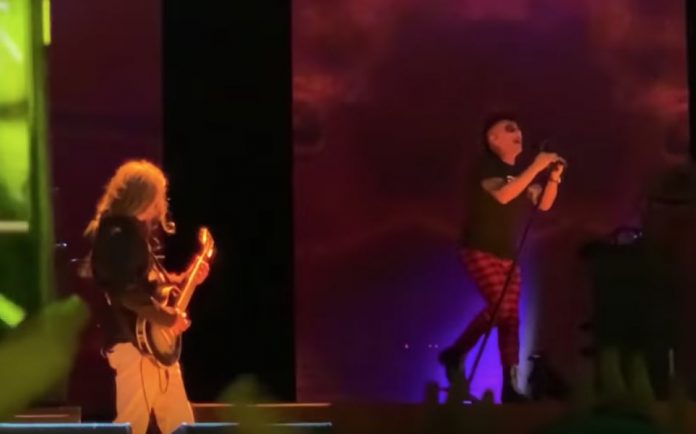 It’s never a good sign when an act has to end a show early or cancel anything that they have had planned ahead of time. That’s what we are facing in the world of Tool currently as word has just began to spread about a possible issue with Maynard James Keenan. The iconic singer was having vocal issues at a recent show and fans took notice rather quickly.

The severity of the issue was noticeable enough to take to Reddit where fans started to ask one-another what was wrong with Maynard. This was eventually figured out by those who were commenting on the thread. Looking into the thread, we found out that Maynard is getting through the flu right now. Yes, just the run-of-the-mill flu.

It’s sad that the singer has to go through this while on tour, but in the same breath, at least it’s nothing serious that would totally put an end to what the band has going on currently.

A commentor on Reddit stated that Maynard James Keenan took the time to address the elephant in the room to the crowd as he felt it needed to be said since it was that noticeable when it came to his vocal performance, as fans said he was ‘losing his breath’ and the setlist was cut short near the end. Maynard was said to have stated: “Short story. I woke up with the flu this morning. My voice couldn’t make single sound. There almost wasn’t a show tonight. Also, I’m 58 and I’m fu*king tired. But you’re worth it.”

As of now, all shows coming up are still on for Tool and Maynard James Keenan. While there is no word on this, and this is purely speculation, we may see some guests at upcoming shows to help out Maynard. At least, that’s a fun idea to think about since Maynard may not be able to hold it down himself.