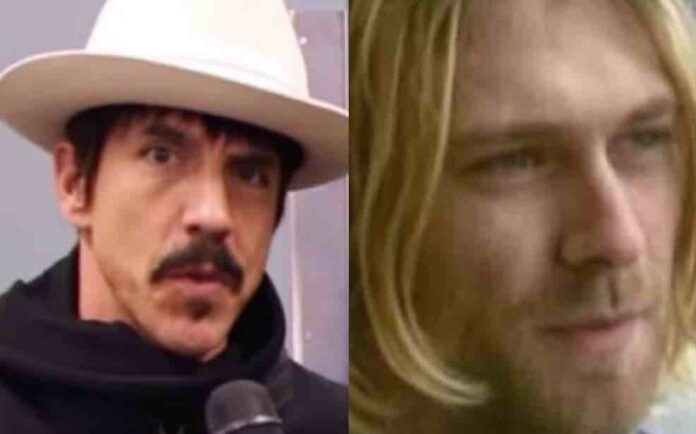 On Saturday Red Hot Chili Peppers performed a part of Nirvana’s era-defining “Smells Like Teen Spirit” to close out their 11-song set at Flea’s benefit for the Silverlake Conservatory Of Music.

Fan footage shows the band launch into the track’s verse – John Frusciante’s Boss CE-1 Chorus Ensemble handling Kurt Cobain’s Small Clone warble – with Anthony Kiedis tackling the track’s lower-register verse (with a t-shirt over his head). But the rendition really erupts when Frusciante takes over lead vocals for the chorus, screaming the refrain that lit a fire under ’90s rock.

Sadly, the band only performed the track’s first verse and chorus to close out the show, which also featured Chili Peppers classics Snow ((Hey Oh)), Californication and By the Way.

It has been noted that the Silverlake Conservatory of Music is a nonprofit organization founded by RHCP bassist Flea, and counts Kiedis among its board members. The bassist and his Chili Peppers bandmates regularly perform to raise money for the Conservatory, and audiences can usually expect a few surprises.

The cover is also timely given Cobain’s influence on the band’s pair of albums for 2022, Unlimited Love and Return of the Dream Canteen.

As Frusciante told in a marathon interview earlier this year: “I really love guitar players like Randy Rhoads and Eddie Van Halen for the way that they could make the instrument explode through hand and whammy bar techniques. But I also really like the way people like Greg Ginn or Kurt Cobain play without it being so much about technique – although there are all kinds of unconventional techniques in there – but the focus is definitely a more visceral thing.

“Eventually, by the time we were recording, my concept was to find a bridge between those two conceptions of the instrument: that idea of making it explode with the electricity of the human energy that comes through the strings.”