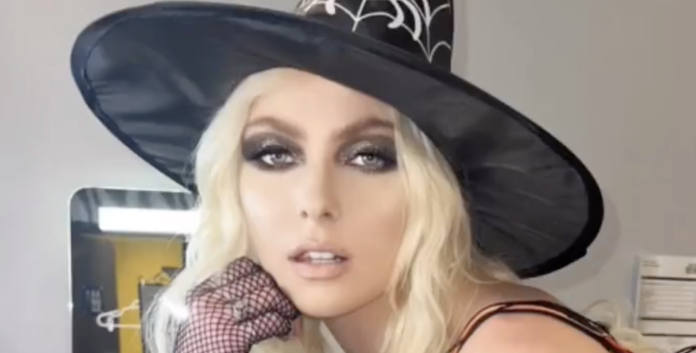 Taylor Momsen wore a scorching Halloween outfit in a video to celebrate the holiday.

Momsen also recently told Stereoboard about The Pretty Reckless’ comeback album, “‘Death By Rock and Roll’, as cliché as it may sound, writing that record saved me. I went through a lot of loss, a lot of death, and was in a very dark place. I was in a deep hole of depression, substance abuse and on a very bad path I didn’t see a way out of. And the scariest part was that I was fine with that. I’d become content knowing I was going to fade into nothing. I’d given up and didn’t see a reason to move forward.

[Eventually ] I turned to music. I turned to writing, not intentionally, not as intentionally as making a record, just to get through the day. But by the time I finished writing the album I’d started to come out of the other side. I worked my way through everything and it pulled me through the grief. So it is a very helpful record, which I didn’t know while making it, but it tells a full circle story of life, love and loss and that it does get better. If you hang on a little longer life will sort itself out and it will turn around. There is light at the end of the tunnel, you just have to wait it out.”

The Pretty Reckless opened for Soundgarden on their final 2017 tour, and were in Detroit the night Chris Cornell died by suicide. Cornell was Momsen’s musical hero, and he had become a mentor on tour.