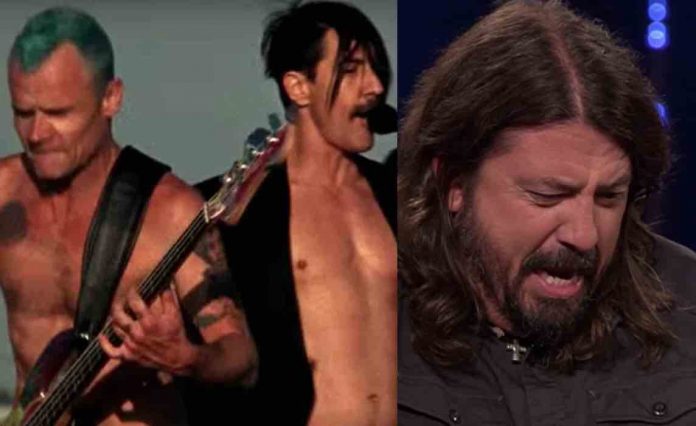 In a new interview with Warren Huart, recording engineer Bradley Cook looks back on engineering the Foo Fighters The Colour and the Shape. With frontman Dave Grohl and producer Gil Norton at the helm, drummer William Goldsmith had a lot of pressure on him to perform when they began recording at Bear Creek studio in Washington. Alternative Nation transcribed Huart’s remarks.

“We did the record and came back from Christmas vacation and everyone listened and decided that we didn’t get it. I guess the drums weren’t super happening on most of the songs. Some, but not all.”

Dave Grohl then re-recorded the drums when they relocated to California without Goldsmith.

“Yeah, there’s no re-doing the drums, we had to re-do everything from the ground up. That’s what we did. I suggested going to Grandmaster because it’s kind of like my home studio. We went there and just knocked it out because we already did it so we knew what was up with those songs and it was fast. We were finishing a song, then we’d go down the street to Skip Saylor’s to Chris Sheldon to mix.”

“I think I told you in my first interview, ‘Monkey Wrench’ needed a third guitar on the chorus so the tape came back and we threw a third guitar in and back to Skip Saylor’s for the mix.”

Goldsmith later found out that his drumming was replaced and left the band, later reuniting with Sunny Day Real Estate.

Grohl had some help from the Red Hot Chili Peppers gear wise on a key song when redoing Goldsmith’s drums. When asked about the snare drum sound heard on the huge hit “Everlong”, Cook explained that this was an infamous snare used by the Chili Peppers and some other big names.

“The snare itself? So Ross Garfield, the drum doctor, a hired drum doctor for some drums and stuff, and that snare is the legendary Terminator snare; the Tama Bell Brass that was used on all kinds of stuff. Do you know what stuff? The Chili Peppers stuff, Nirvana-Nevermind snare basically. So he [Dave Grohl] loves that snare.”

Asked about the rest of drumkit used by Dave Grohl during the recording of The Colour and the Shape:

Huart comments that Ross tends to have the drummers use a Gretsch kit when he’s has a chance to decide for the band involved. He did the drums for Red Hot Chili Peppers’ Blood Sugar Sex Magik album, and with many other mainstream rock artists including Metallica and Neil Young to more pop-oriented artists like Michael Jackson, Paul McCartney and even Frank Sinatra.