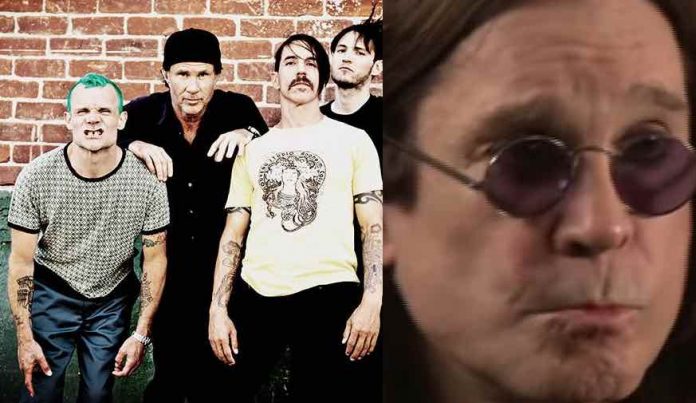 Chad Smith posted on social media, “Yours truly beating up the skins with @postmalone @ozzyosbourne @travisscott @thisiswatt @louisbellmusic ‘TAKE WHAT YOU WANT.'”

logan__moyer commented, “Kinda backhanded that they didn’t feature you, just listened to the track and feel they underutilized your pure genius.” bonzobashing said, “WHY ARE YOU NOT CREDITED.” vernice_dolorosa wrote, “What the fuck am I looking at.”

simenolsenr asked, “Who plays the guitar solo on this?😁” heythereimriley responded, “@simenolsenr my guess is zakk wylde, but it hasn’t been announced yet unfortunately.” senorloop added, “@heythereimriley if is Zakk you will know, no doubt.”

funkyflorian said it could be someone else, “@heythereimriley its @thisiswatt he is a crazy guitar dude.”

simenolsenr added, “@funkyflorian yeah, did not sound like zakk, different vibrato and the use of a whammy bar put me off. He really rocked the solo though, cool shit.” nonarrab_nayrb concluded, “@simenolsenr probably Post Malone he’s a also a great guitar player.” Ozzy Osbourne called out a ‘rock star’ drug dealer a few days ago.

Ozzy Osbourne is currently recovering from health issues he suffered earlier this year, with plans to resume his ‘No More Tours 2’ in 2020. Red Hot Chili Peppers are currently recording a new album, with Anthony Kiedis previously stating he wanted the new album out in 2019, though it could be looking like 2020 unless we get an announcement soon. Former Red Hot Chili Peppers guitarist John Frusciante recently announced a huge comeback.