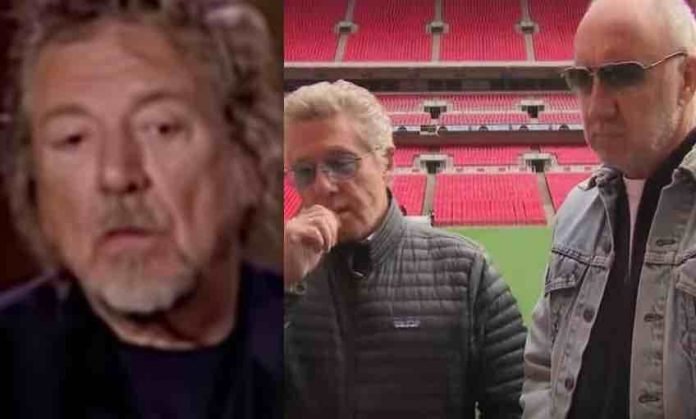 Classic Rock asked, “Pete Townshend recently said he thought guitar-based rock’n’roll had exhausted its possibilities, and that new technology has opened the door to create other forms of music with different attitudes and ways of working. What’s your take on that?”

Plant responded, “I just think that the game is there for everybody and everything. As far as the people on the street are concerned, it’s just a matter of taste. There are people making great music everywhere, all the time. Pete’s right in that as far as recording techniques and changing the whole idea of creating songs goes, you don’t have to worry about a guitar solo.

You can put in lots of little bits of confectionery in contemporary stuff. And humour and social commentary. Not everything has to come from Nashville. I think that’s just the way that Pete feels. Also, he’s been travelling a lot, so he’s probably switched on to all sorts of musical formats.”

Robert Plant discussed a Led Zeppelin bandmate driving after drinking earlier this week. Jimmy Page wrote on social media earlier this week, “On this day in 2010, a Peace Concert in Beijing was announced.⁣ There had been a move to do a Peace Concert, hosted by the Chinese Government, at the Bird’s Nest Stadium in Beijing and I had been invited to appear. There had been a full-size classical orchestra offered and I saw a possibility of doing an instrumental set including Chengdu percussion and the orchestra. It could have been an interesting blend.⁣
⁣
There had been a meeting with some officials where it was said that they would need to see the artists’ lyrics up front and I thought that was fair enough, but a Peace Concert in Beijing could have had its moments of mischief.

It was fascinating to see how it might proceed; in fact, after a postponement from 17/04/10 to 11/11/11, it ran out of steam. At the press conference at the Beijing Ritz I was given an award called ‘Pathways To Peace’ – it was the first time the award was given from the United Nations.⁣”

You can read the full Robert Plant interview at Louder Sound.