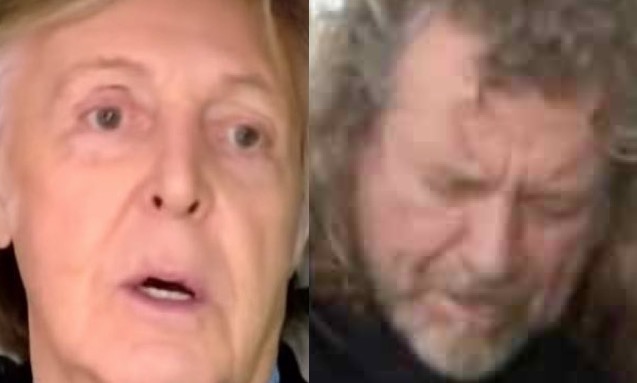 Led Zeppelin frontman Robert Plant revealed an awful and hilarious nickname The Beatles icon Paul McCartney’s late wife Linda McCartney used to call he and his wife as they recovered from injuries on his Digging Deep podcast.

“No, it was a hell of a time. It was such an important time in life where you need to have everything operating, you know. My wife and I, we had two kids. I suppose it was the most ridiculous thing to find that as a family we were completely torn asunder during a period of months, it was a very difficult thing to get anywhere near back together again, and of course, Maureen, my wife, she was in a wheelchair too.

She smashed herself up and she had a fractured skull, all sorts of stuff, her leg was smashed to bits, and she was here in London, she was in chronic pain for years. I remember Linda McCartney used to go stick around with, I think Lulu or somebody, and they used to call us Robert and Morphine because she was in such gib.”

Robert Plant also shared a story about Brian Jones, best known for being the original founder of The Rolling Stones who tragically passed away in 1969. He also discussed his pain after being wheelchair bound due to an accident.

Plant: So what was I gonna do? I was laying horizontal in a bed at the Continental Riot House over in Los Angeles, California. It was Halloween and the year was 1975. I was in a room on my own in this dodgy old hotel while the world was playing hi-jinx outside and the the whole place was going,  you know, in a totally different direction than to me and my bad leg and my bad arm. So, I started writing about freedom as well as escape. The whole thing about the song is to be gone to a place which is a reward aesthetically and beauty  – space and air and stuff and it was essentially about going back to the Atlas Mountains and going back to Morocco.