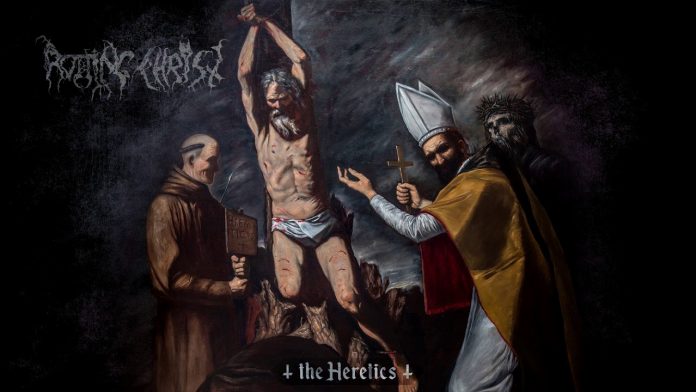 Greek metal trailblazers ROTTING CHRIST return with their stunning new album ‘The Heretics’. In a signature style honed by 30 years of toil and triumph, the quartet deliver heavy metal thunder so epic that it could have been forged by the gods themselves. The anthemic “Heaven and Hell and Fire”, “The Raven” and “Fire God and Fear” are staggering in their size and breadth. The power and majesty of ‘The Heretics’ can only be achieved by a band with a lifetime’s devotion to heavy metal, and proves these pioneers to be among the genre’s all-time elite.

I was recently able to speak with Sakis on the topic of the latest album as well as the recent, black metal biopic, Lords of Chaos.

So I hear you guys are getting shows banned canceled once again?

Yes. Sadly they’re still people who refuse to let us play their venues due to our name. As long as these people exist Rotting Christ will be continue to be fueled. I have no personal problem with if someone believes in a religion, but i have major issues when they use it to not let others do what they enjoy.

Your latest album is getting lots of acclaim. How does it feel to have been around so long but still be accepted greatly by fans?

It feels good to know our fans have open minds. We have been around since the 1980’s and are a band that evolves and takes many forms and will always look forward.

What are your thoughts on the Lords of Chaos film?

It is a very good film. I know it has it’s inaccuracies and I know people from that scene and they hate it, but I feel it’s cool that black metal has become part of history.