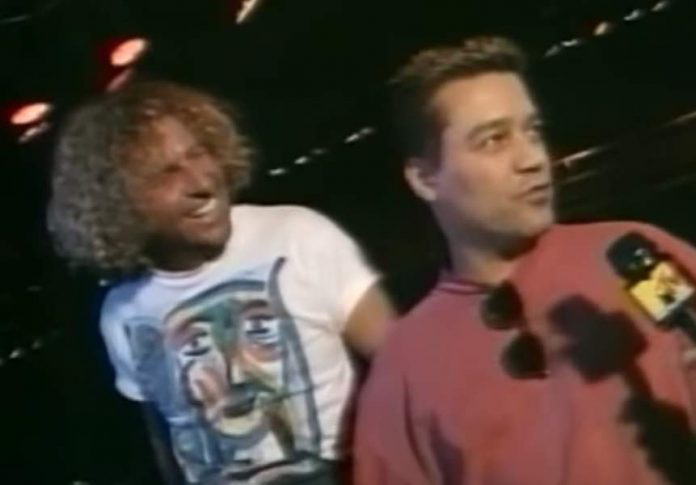 Former Van Halen singer Sammy Hagar posted a tribute photo with Eddie Van Halen yesterday, and then apologized after fans got in an argument in the comments section regarding Eddie’s guitar. The Eddie Van Halen last photo playing guitar was recently revealed.

Hagar posted, “#Throwback to 1988. Eddie and I holding each other’s guitars. That was Frankenstein and he had my model he had made for me from Kramer. #MissYouBud #OU812 #Backstage.”

Unbeatenmeat shot back, “That’s not even the 5150.” Runupdoneup69 asked, “Where is the OG Frankenstrat?” Budgie5150 said, “I saw it last summer here last summer at the Met. I think the exhibit went to Chicago after that? Don’t know where it might be, now.”

Evanjmohr added, “Museum in Washington DC I think.” Iamtomprather proclaimed, “This is not the 5150. It’s a road back up. Potentially the 1984 guitar.”

Sammy Hagar himself then apologized to the original commenter, “Sorry dude it’s the first time I ever called of that?”

Cody_makes_music chimed in, “Probably the same kind of fan who comments on Wolfgang’s shit telling him he doesn’t belong in the band. 😂”

Ed.hannigan concluded, “But it was called that in the inner circles even by Eddie, frankenstrat was a name created by the outside world hence why Sammy used Frankenstein. Although that’s not her in the photo it’s a totally different guitar.” The Eddie Van Halen last photo with Sammy Hagar was revealed earlier this week.