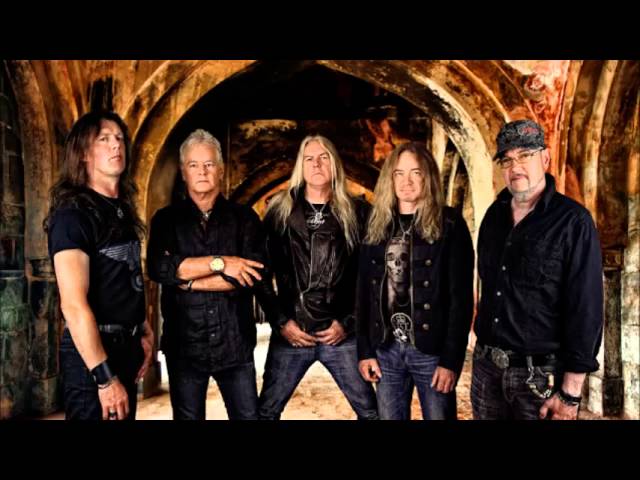 When metal legends Saxon were confirmed to play the iconic Poughkeepsie, New York metalheads all over the area got excited to catch such an iconic band close to home. The band brought with them Irish rockers, Black Star Riders. For those who don’t know Black Star Riders is a newer band that features classic Thin Lizzy guitarist Damon Johnson. Both bands are currently on tour with Judas Priest and this was one of their few off dates.

After comedian Jim Florintine gave an introduction, Black Star Riders Played. The band played a killer set and were loaded energy. The venue got packed quickly as everyone started cheering and singing along. They played songs from all of their albums as well as the Thin Lizzy classics “The Boys are Back in Town” and “Jailbreak”.

After another short intro by Florintine once again it was Saxon’s turn to play. Since Saxon were headlining this show they got to play a much longer set. They started off with some tracks from the new album as well as the track Battering Ram from the last one. We then got several classics including “Power and the Glory”, “Crusader”, “Strong Arm of the Law” and “Motorcycle Man” .The band would flip fop between old songs and new songs for the rest of the set before ending with their signature song, “Princess of the Night” and then encored with the classics “Heavy Metal Thunder” and “Wheels of Steel”. The band was on note and straight to the point and the sold out crowd was more than pleased. Before the show I had the honor of interviewing vocalist, Biff Bilford on the band’s tour bus. We discussed the band’s new album along with some other goodies.

How is the touring with Judas Priest going along and what made you decide to play this off date?

Biff – The Tour is going fantastic. There is a lot of days off from the tour so we decided to fill them with little headline shows here and there. We don’t like days off.

Since this isn’t a show from the priest tour should we expect a different set.

I notice on the track Nosferatu you guys went for a very gothic approach.

It’s about Dracula so it needed to be gothic. The book is set in Victorian times so the song is all about that era. I’d say it’s our most gothic track since the orchestral version of Crusader.

What made you call the album Thunderbolt?

I like the word and the first song we wrote was called Thunderbolt. It makes a great connection with the record. The album is doing fantastic. It’s our best selling since 1984 and is number 30 in England. It’s a very successful album already. We are happy that the album is getting great attention.

Your more recent albums are some of the most acclaimed late albums from an older band. How do you guys stay fresh over the years.

I like to kept things exciting and never become too predictable. It’s very easy when bands come out and play just a few blues licks and sit back and relax. The essance of the music is still in the 80s but with a modern twist.

Whats your thoughts on rock music today and what newer bands do you enjoy?