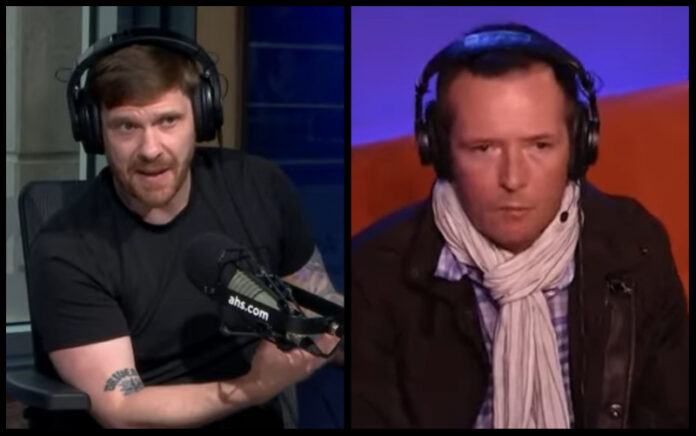 Shinedown is one of the last twenty years’ most prominent hard rock bands. With hits like ‘Diamond Eyes’ and ‘I Dare You’ the group has gone on to sell more than 10 million records. During a recent exclusive interview with Alternative Nation, which will be published in full soon, lead singer Brent Smith discussed the tribute that he along with guitarist Zach Myers did for late Stone Temple Pilots frontman Scott Weiland in Destin, Florida during an acoustic tour back in 2015. Smith would touch on the performance, meeting Scott, Weiland’s legacy, and how he compares himself to the late singer. Alternative Nation transcribed the following exchange.

AN: “You know what I love about Shinedown is just the honesty of everything. You’re carrying on the ethos of someone like Scott Weiland. I know you and Zach [Myers] paid a pretty emotional tribute to the late Stone Temple Pilots frontman after his passing. Do you have any memories of that performance and the legacy of Scott?”

Brent Smith: “People want to talk about how you don’t want to meet your heroes and be careful if you get the opportunity because nine times out of ten they’ll disappoint you. I got the chance to meet him when he was clean, sober, and in the best shape of his life. It was during the Velvet Revolver days, early on. Dude, he couldn’t have been nicer. When he was himself when he was him. Scott was such a performer too.

I met him in catering and he came in and I remember he was like super, super thin, and this compact dude. I remember going up to him and saying: “Scott I normally never do this and I know you’re probably annoyed by this but man can I get a picture with you?” He looked at me and said: “Are you kidding me? Absolutely.” He didn’t know me from Adam either. This was around 2006, around our second album.

I also really loved the switch that would go off because the person he was just hanging around wasn’t the person he was on stage. Some people have also said that about me as far as if they know me well. Like, the person I am off-stage is not the person I am on-stage, and they’re right. I don’t like the term ‘rock star’ I think it’s kind of silly. It’s a term that is used a lot but for me, yes I am a performer and if I’m a ‘rock star’ I’m only that for the time that I’m on stage. Nobody paid for the Brent Smith that you would see at the grocery store, I’m there to play a show. That’s something that noticed about Scott and something that I got to see firsthand where Scott was very, well, in the latter years it wasn’t pretty, but I choose to remember him when he was healthy, strong, and just a charismatic, sweet guy offstage yet completely the opposite onstage.”