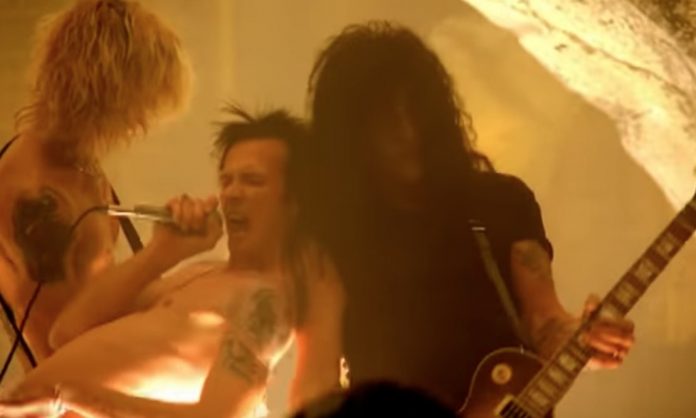 Slash discussed his late Velvet Revolver bandmate Scott Weiland’s thoughts on Guns N’ Roses reuniting in a new interview with Theresa Rockface (transcribed by Blabbermouth). Weiland told Alternative Nation a few weeks before his death in late 2015 that Guns N’ Roses would reunite. This was prior to the band confirming the news in January. Weiland also praised Slash as becoming an icon, saying that he was now known as ‘the hat.’

“It was cool to do it. In a way, I think it was sort of cathartic for Duff [McKagan] and I to be doing it. Scott [Weiland] was always very supportive of the idea of Guns getting back together, and I was such the anti-Guns guy. I have to be honest. It was just me being stubborn and whatnot, so it was great being up there performing that song, something that we did with Scott, and [since] he had always thought that we should get back together, it had a combination of little things to it.”

On Myles Kennedy, the vocalist for his solo backing band, The Conspirators:

“He’s great. To work with him, artistically, he’s great, because he’s really open-minded. He can find a melody in almost anything, which makes my job easier. I come up with musical stuff, and I’d say eight times out of ten, things I come up with, he’ll find a really great melody for, which is pretty awesome and prolific. As a person, he’s really laid-back. He’s not a ‘rock star’ at all. He’s very sort of soft-spoken, mild-mannered and just really easygoing, so he’s a pleasure to work with.”

“The thing is about playing live for me is it’s a great platform for me to be able to improvise. I probably get the most practicing in, and the most creative output from coming up with ideas on the fly while we’re out there in front of a bunch of people as opposed to sitting around on the couch, trying to think up something.”

On whether there are any great riffs that have not yet been written:

“That’s the journey, right? I’m always keeping a guitar with me for the most part everywhere I go, and just messing around and seeing if something comes up, and if you have an idea, just applying it to the guitar immediately so you can capture it immediately before it disappears.”

“Rock n’ roll, I don’t want to be cliché, but that’s what turned me on when I started, and it’s always going to be the thing for me. I’ll always be putting out records that are that. As far as what everybody else is doing, it’s struggling as I guess what you would call a genre, but I think because of where it’s at right now, it’s making a lot of kids sort of rise to the top of the heap as far as doing it for the right reasons. There’s no money to be made in it; there’s none of those lures that you used to have — cars and money and chicks and Learjets and all that shit. If you want to do this, you’ve got to be doing it for the passion of it, with really no other real rewards except for making cool music.”

“One thing that always comes to mind is, people have this sort of preconceived image of what a rock star or what a rock personality, what they’re supposed to act like or what their image is supposed to be. Lemmy’s one of the most hard-ass, on the surface, people in rock n’ roll. He definitely looked the part of dangerous. He definitely looked like the drinker and all that. The thing is, he was such a well-spoken, well-read, educated and compassionate [person]. He was very much the gentleman, and he was very conscious of other people’s feelings, but he didn’t take any shit, so he was a really interesting dichotomy of all these different things that people don’t understand when they look at him. They think, ‘I’m supposed to act like a bad-ass and act like a dick to be a rock star,’ and that’s not the case. I think he was a great sort of icon to change that.”