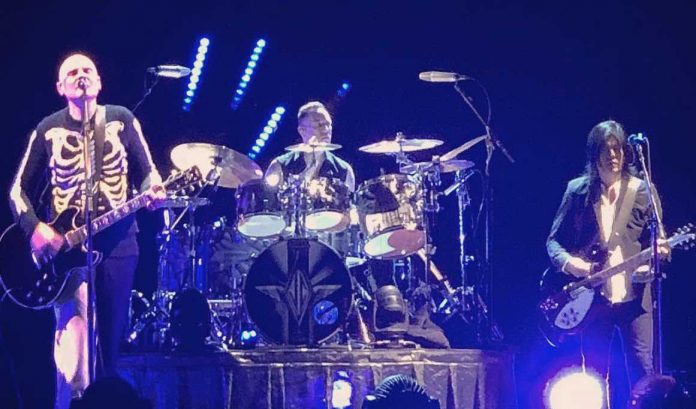 The Smashing Pumpkins performed at the T-Mobile Arena in Las Vegas on Sunday night, and while The Shiny and Oh So Bright tour has been widely acclaimed by fans for its over three hour set full of Pumpkins classics, one fan fell asleep in Vegas, perhaps after a day of too much fun in Sin City. During “Try Try Try” off of MACHINA/The Machines of God near the end of the set, a fan was filmed falling asleep. Another fan on Twitter wrote, “Ten points for being able to sleep anywhere.” Billy Corgan wrote about certain Smashing Pumpkins fans not being familiar with “Soma” and non radio hits at the Vegas show in a new Instagram story Q&A.

“There’s no way they could be at big places like we are playing now. Example: we played Soma tonight and I’d say 75pct of crowd didn’t know the song.”

Boggles my mind that people don’t know of/listen to Soma. Experienced it firsthand in CHI.

“Speaks more to people listening only to ‘greatest hits’ and coming to show for those (which is fine), but nixes the fan idea that every person in arena knows deep cuts/b-sides.”

The pre-tour ticket chatter gave you no credit for playing everywhere across the U.S.

“The pre-tour chatter was click-bait driven and devoid of contextual fact. Here’s a fact: before we played a single show this tour was the biggest SP tour since 1997.”

The Smashing Pumpkins have also announced a ‘The Nights We Stole Christmas’ 30th Anniversary Series concert with Grandson and Albert Hammond Jr. on November 30th at the Aragon Ballroom in Chicago.

Ten points for being able to sleep anywhere. #SmashingPumpkins pic.twitter.com/nOElpkeltg

Returning to our roots for a high energy show at Aragon Ballroom in Chicago.