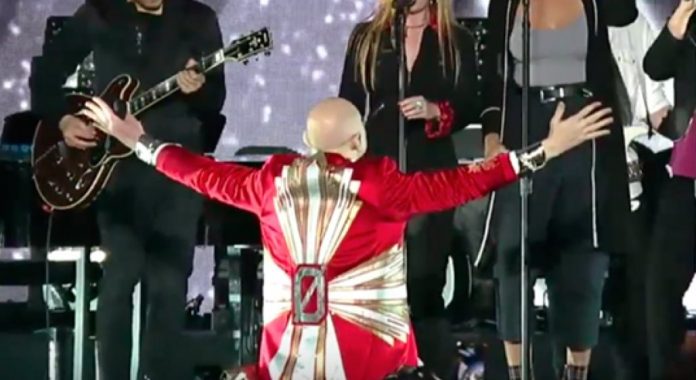 Night 1 of KROQ’s Absolut Almost Acoustic Christmas at the Forum in large part was about honoring the station’s storied history in Los Angeles, but was also about looking forward. Billy Corgan mentioned The Smashing Pumpkins putting the ‘rock’ in KROQ, and this show definitely did that. Corgan also invited former 90’s Smashing Pumpkins keyboardist Mike Garson onstage during their performance.

Bad Religion’s set rocked, and featured a shout out to KROQ for their support over the years. My first KROQ show was the Weenie Roast in 2007, and Bad Religion were also on that bill. Bad Religion also brought the Christmas spirit to the show, playing their song “What Child Is This?” live for the first time.

Greta Van Fleet stood out, as they were by far the youngest band amongst the top acts at the show. They blew the roof off the place and got the most visceral fan response of the night. My friend who had never heard of Greta Van Fleet was blown away, and called their singer the next Mick Jagger (not a Robert Plant comparison for once!). I saw Greta Van Fleet live for the first time in October, and they were even tighter at this show. I’ve seen the Led Zeppelin criticism as a valid one and still believe they have room to grow when it comes to originality, but they are already great live performers with some solid songs, and they should get even better with age when it comes to formulating their own identity, with many hits on KROQ for years to come. One thought I had during the set though was that I saw The Smashing Pumpkins play “Stairway to Heaven” at the Forum in August, and boy would it have been cool if they did it with Greta Van Fleet’s singer!

Third Eye Blind were next, and they were another band I saw live for the first time back in October. Stephan Jenkins knows how to put on a show, there was a point where he was trying to explain the feel of absolute joy he gets at concerts like KROQ Absolut Almost Acoustic Christmas. He described the feeling in two words: ‘Fuck yeah.’ He then got the crowd to chant, ‘Fuck yeah.’ Jenkins takes a moment during “Never Let You Go” and “Semi-Charmed Life” to interact with the audience, and during those moment at this show, he mentioned that in their over 20 year history, Third Eye Blind had never played the Forum. He also said KROQ had never stopped supporting Third Eye Blind in over 20 years. Third Eye Blind definitely continue to impress KROQ fans, as I heard one fan after the show even saying that Third Eye Blind put on the best show on the bill.

Thirty Seconds to Mars were next, and they definitely put on the most pop presentation of the show compared to the rock acts, with a largely synth/electronic driven set musically, led by Jared Leto on vocals. There were balloons, confetti, and fans invited onstage dancing. Even if Jared Leto’s brand of music isn’t your bag, his showmanship is highly entertaining and adds a great flavor to a show like this.

The Smashing Pumpkins headlined for their third show at the Forum this year. I saw them back in August for one of their over 3 hour marathon shows, and this was a far shorter set, though it fortunately had some variations setlist wise to keep it from going stale, though several songs like “Dross” and “Heavy Metal Machine” that they’ve played recently were absent. Four new songs were played, including three that weren’t on the summer ‘Shiny and Oh So Bright’ tour. “Knights of Malta” impressed me. I’ve seen video of the song on tour where backing tracks are used for the female vocals and found that to not fit a Smashing Pumpkins show, but this show featured three backing singers performing live, and it made it a highlight of the set. James Iha singing The Cure’s “Friday I’m In Love” was a full circle moment for me, as a decade ago I went to my first KROQ Christmas show, featuring The Cure, The Killers, Kanye West, Death Cab For Cutie, and Scott Weiland (who I met for the first time).

The most powerful moment of the set was Billy Corgan discussing the fires that recently hit Malibu, and how former Adore era Smashing Pumpkins touring keyboardist Mike Garson lost his home and studio. Garson has also worked with David Bowie and Nine Inch Nails. The loss of the fires were definitely felt throughout the night, with firefighters even coming onstage. Corgan then invited Garson onstage for a strong rendition of “Disarm” with Garson playing piano.

Overall it was a great show, with KROQ also putting together a great setup in the VIP club, with food, an interview stage, and a photo booth type setup. Definitely go to a future KROQ show in Los Angeles (like Night 2 tonight featuring Florence and the Machine and Mike Shinoda) if you live in the area!