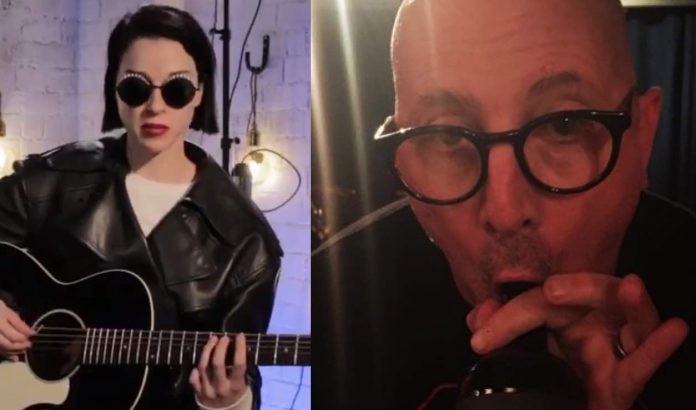 St. Vincent performed an impromptu cover of the Tool classic “Forty Six & 2” in a new BBC video, which you can watch below (25 seconds in). She incorrectly called the song “My Shadow.” St. Vincent has previous ties to the 90’s alternative rock scene, having fronted Nirvana for a performance of “Lithium” at the 2014 Rock and Roll Hall of Fame induction ceremony.

Watch the cover, and let us know what you think in the comments!

Which riffs do you wish you had written?

? @st_vincent had some brilliant suggestions when she took over our Instagram today. #HearHer pic.twitter.com/eKa04UiKXA

Blair is back with a new Tool newsletter.

With a few pages left in my Dollar Store legal pad and a heavy dose of blood pressure meds running through my veins, I offer this 18th-anniversay Tool snoozeletter to anyone that might care to read it (perhaps my mother?).

Now that the rare immersive dissections and performances (damn near in your living room!) are a thing of the past (unless everything occurs simultaneously?), I can disclose to the billowing masses (including the band members themselves) that I was among those in attendance at one the clinics where I was cleverly disguised as Tipper Gore so as not to be conspicuous. Knowing that the band members would have spared any expense in getting me to the experience – such as a first class airline ticket, five star hotel accommodations, Michelin gourmet “farm to table” greens and late night entertainment where the bowl of assorted nuts at the bar is changed after any one nut is touched, I instead chose to travel on a bumpy Greyhound with a sack that contained the wrong (but right!) Arby’s order and stay at a hostel with a mirror that didn’t quite do me justice just so I could be there without anyone knowing.

What I wanted to hear was how the guys answered certain questions – such as: How hard is it to tune a nano Silverburst guitar? How many salmon on average does Justin catch while fishing in Alaska from his Boxing Day gift Sikorsky S-76C helicopter? What’s the number of stops on the pipe organ inside the replica Nautilus submarime anchored in Maynard’s swimming pool, and does Danny still feel the mystical vibes from the Knights Templar artifact that was melted down to be included in his Jeff Ocheltree Custom Craft set? Incredibly, no one asked about these things. I would have thought for sure that there would be questions about the advantages of parking bollards at the new loft, or if there were any updates on the new refrigeration system for the vintage Pepsi machine. But, no, instead, fans were asking really odd things like “How’s it going with the recording process?” Is it me – or does that seems kind of silly? Oh, well, you had your chance…

The iced Plobium drinks and endangered animal crackers were a nice touch, and I thought it was prudent of the guys not to hand out gift cans of pumpkin-spiced ravioli until we find out whether or not Chef Boyardee gets accused of sexual harassment with Sarah Lee, Dolly Madison and others?

As for the video props and other items of interest, I wondered if “Problem 8” might be somehow displayed without anyone being aware of it? It was a bit disappointing not to see those crazy ants from planet Serpio that Rance Q. Spartley was involved with, but I can certainly understand the dangers involved with a display like that. Giant Walking Sticks from Indonesia should have been okay, other than the constant watch required by security to keep the f**kers from jaywalking at all hours.

All in all, though, it was great to hear the life changing stories shared by so many Tool enthusiasts to host Justin Roberts (@justinroberts – Facebook.com/TheJustinRoberts) prior to the guys taking the stage (I mean, walking into your living room).

The Tool network on our aqueous blue gem in the cosmos is vast and wide, including fans from India, Brazil, Mexico, Australia and even a Six-Dimensional Non-Newtonian Continuum where Danny signs his name using only a green marker and ideas about pantheistic multiple-ego solipsism are freely discussed.

Thanks again to everyone who seized the moment and made the intimate forums such an unforgettable experience. With all the technical knowledge and philosophical concepts that were shared among the Tool community, I’m looking forward to some great prog-metal in the years to come. Only, watch out for recording studio fires, okay…

a fan who attended the clinic in Pittsburgh

without having to make the translation in a continua buggy.