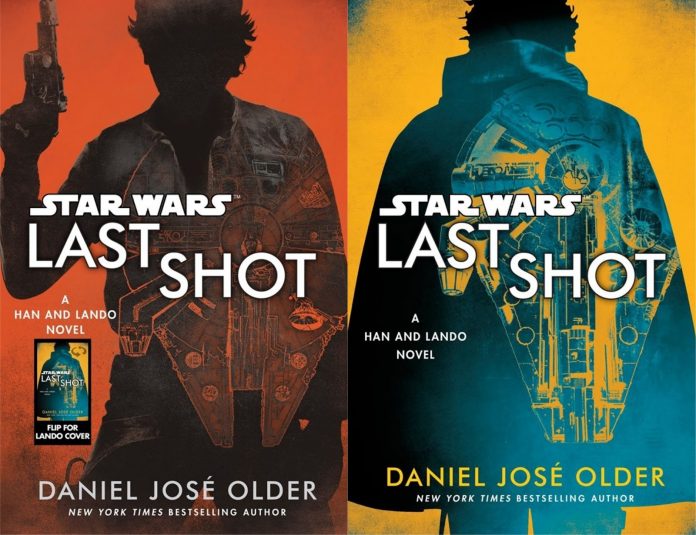 Star Wars: Last Shot is the latest addition to Del Rey’s canon Star Wars novel lineup, tying into next month’s Solo: A Star Wars Story. Written by franchise newcomer Daniel José Older, Last Shot focuses on the exploits of Han Solo and Lando Calrissian over a fifteen year period – a non-linear narrative spanning the events before and after Solo, and the years following Return of the Jedi.

Last Shot finds Han and company caught in a web of intrigue surrounding the enigmatic Fyzen Gor – a mad scientist with a burning grudge in desperate need of a device that was stolen from him ten years ago. In their quest for this MacGuffin, Han and Lando recruit a colorful cast of heistmates picked from the zaniest sides of George Lucas’s imagination. This includes a brilliant Ewok slicer (yes, really), an Ugnaught assistant, and a bored Gungan security officer who is fed up with the unflattering stereotypes surrounding his species.

Older does a fine job of capturing the roguish attitudes of Han and Lando, crafting the flat out funniest Star Wars novel to date. His character interactions nail that delicate Star Wars tone, anchoring it with down-to-earth banter dripping with profanity and sexuality, moreso than any other Star Wars tale to date. In addition to this fresh, gritty perspective offered by Older (who worked as an EMT in New York City for years), readers will get their first real glimpse at a narrative set in the canon Star Wars timeline not intrinsically tied to conflict with the Galactic Empire or the First Order.

Some other points of interest for a perspective reader: Older offers insight into Han’s early years as a father and the budding disconnect between him and his son, Ben Solo, that would ultimately lead to their confrontation in The Force Awakens. Also, Last Shot includes the Star Wars galaxy’s first gender-neutral Human character, the pilot Taka Jamareesa, who seems to be a biological male, but goes by the pronoun “them/they”.