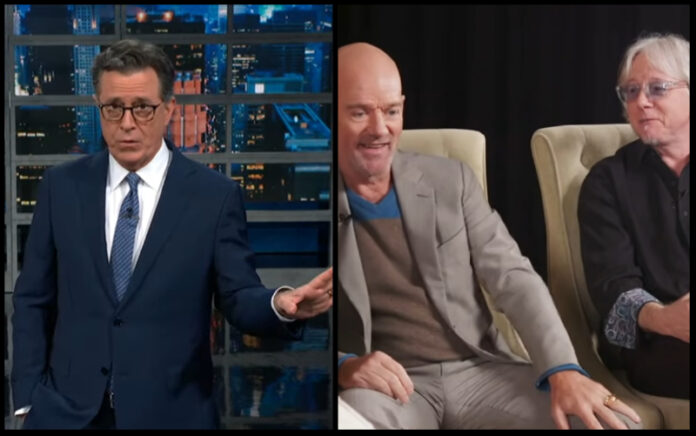 It has been quite a busy month for the United States of America, politically speaking. Most recently, it was announced that the landmark court decision Roe Vs Wade would be overturned and this led to a severe backlash within a good sector of the country and including this country’s entertainers. One prominent example of this would be how Green Day frontman Billie Joe Armstrong would recently announced that he would revoke his United States citizenship, also stating: “F*** America” in the process.

In a more mild and more vague reaction, the always political and topical Stephen Colbert, host of CBS’ ‘The Late Show with Stephen Colbert would recently tweet out the following message: “R.E.M. lied to me about the end of the world as we know it. I do not feel fine.”

In other news revolving around R.E.M; the band will be reissuing their 1982 debut EP ‘Chronic Town’ in August to celebrate its 40th anniversary. the EP was recorded at the Drive-in Studio in Winston-Salem, North Carolina, in October 1981, eighteen months after the formation of the band. Its co-producer was Mitch Easter, who produced the band’s “Radio Free Europe” single earlier in 1981.

Chronic Town’s opening track, “Wolves, Lower”, was re-recorded in June 1982, two months before the EP’s release. One of the last times the album was issued a re-release was in 2010 during Record Store Day of that year. The event was held on April 17 of 2010, participating independent record stores sold a limited-edition and individually-numbered blue vinyl 12″ reissue of the long out-of-print EP.

On one major e-commerce site, one amateur review would review the album by stating the following: “R.E.M.’s first published album, Chronic Town, is one of their best creations ever published. Although it contains only 5 songs, the greatness of Carnival Os Sorts (Box Cars), and Gardening At Night, make up for it. If you liked Green and Life’s Rich Pagent, then you will probably love this album, which is included on the Dead Letter Office CD as tracks 16-21 with an acoustic version of Gardening At Night. I hope you’ll enjoy this album as much as I did.”

R.E.M. lied to me about the end of the world as we know it. I do not feel fine.