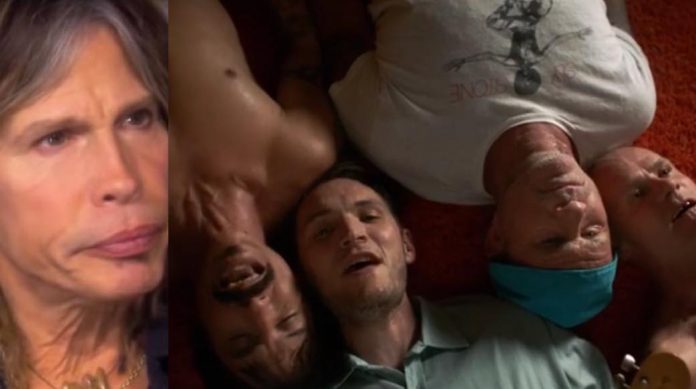 “PROPER PRE-SHOW ‘JAM’ @chadsmithofficial AND @mikemccreadypj AT MONDAY’S SHOW…YOU JUST NEVER KNOW WHO’S GOING TO SHOW UP AT #DEUCESAREWILD ((WILL THE REAL WILL FERRELL PLEASE SHOW UP))…WHEN ARE YOU SHOWING UP? 📷@katbenzova_rockphoto.”

Louder wrote in a review, “A 25-minute pre-show film – a little too long for some – takes you through the history of the band, with audio produced by Grammy Award winning producer (and son of Sir George), Giles Martin. There’s a touch of Vegas showbiz in the dancers and live action characters who roam the stage.

This is a Big Production which you’d think would be restrictive for a band used to 50 years of turning up and plugging in, but the theatrics are never at the expense of the music and it still feels like a rock gig at heart. The 90-minute set may be shorter than their full touring show but the energy levels are maintained throughout and, frankly, you’re left wanting more.

The setlist spans five decades, kicking off with Train Kept A Rollin’, Mama Kin and Back In The Saddle Again; it’s 25 minutes into the show before they play a bona fide hit single, the sublime Sweet Emotion.

Surprisingly, considering the venue and audience, they steer wide of their countless chart-dominating ballads, although when I Don’t Want To Miss A Thing rolls around, complete with cheesy string section, the lighters and iPhone torches finally come out. (We spotted the song’s writer, Diane Warren, beaming from the crowd, possibly thinking of her bank balance).”